U.S. Marines Will Return Home After 13 Years in Afghanistan 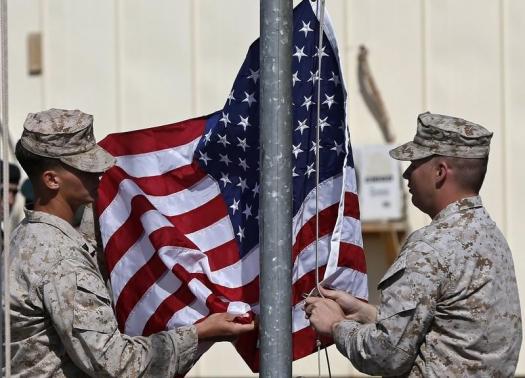 Sunday morning marked the official end of U.S Marines operations in Afghanistan, handing over the last remaining U.S. base there to Afghan National troops.

U.S. Marine troops have been in Afghanistan for 13 years, stationed at Camp Leatherneck in the Helmand province of the country. In a ceremony Sunday, flags were lowered for the last time as both Camp Leatherneck and the British troops base Camp Bastion were transferred to the International Security Assistance Force.

“This transfer is a sign of progress,” Brigadier Gen. Daniel D. Yoo, Commander of Regional Command South West told CBS. “It’s not about the coalition, it’s really about the Afghans and what they’ve achieved over the last 13 years. What they have done here is truly significant.”

According to the Washington Post, troops will continue to secure the borders of both bases until they are able to officially withdraw and return to their home bases. As a security precaution, the exact day of withdraw has not been announced.

As apart of the exchange, U.S. troops are handing over the keys to $230 million worth of buildings and real estate as well as over 6,000 acres of land.

In the fall of 2001, U.S. troops were deployed to Afghanistan with great force after the 9/11 attacks. Over 3,000 people were killed as a result of the incident which triggered U.S. initiatives to combat terrorism and fight Al-Qaeda.

According to CBS, the Marines have been operating as trainers and advisors for the past two years – helping the Afghan army to modernize their bomb detection and medical skills.

Although U.S. Marines are coming home, earlier this year President Obama and new Afghan President Ashraf Ghani signed a security agreement that will keep nearly 10,000 troops in Afghanistan past 2014.

In the last 13-years, over 900 troops have reportedly been killed, including over 400 Marines.