U.S. Marines Reach Out to Female CEOs for Advice on Recruiting 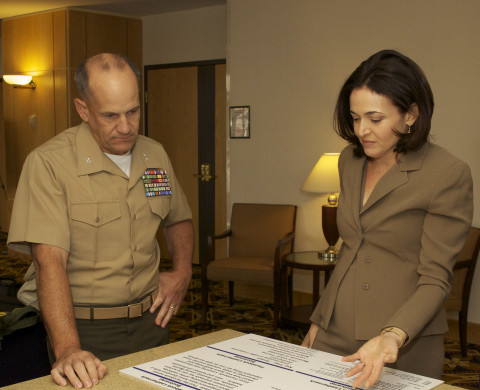 The U.S Marines are calling on female executives to search for solutions to the low number of women enlisting in the Marine Corps.

Women account for nearly 15 percent of the military. There are currently 14,000 women in the Marine Corp, meaning women only make up 7.5% of the Marines – making it the lowest in all of the military branches.

Amos reached out to women CEOs in hopes that they cannot only help keep women in the military, but also find effective ways to deal with the issues they face – like separation from spouses that are also in the military, domestic violence, and sexual harassment.

“They helped me see what I’m not seeing, simply because I’m a guy, and as my wife tells me, an old, white guy,” Amos told Reuters.

Sheryl Sandberg has visited the Marine Officers Candidate School (OCS) in Quantico, VA., twice to discuss various ways to promote discussions about leadership amongst women. This comes at a time when the Army is seeking to diversify its ranks and the military now has two years to comply with the lifted ban on women in combat roles.

Amos told Reuters that he never heard of Sheryl Sandberg prior to reaching out to her for help – however he quickly became acquainted after watching her 2010 Ted Talk which led to him requiring all 15 of the Marines three-star generals (whom of which are male) to read her book “Lean In: Women, Work, and the Will to Lead”.

Earlier this month, three female Marine Corps officers passed the combat fitness and endurance test used as a measure to screen for infantry officers – they will potentially be the first to graduate from the program.

Amos hopes that these milestones along with the help of Sandberg and other female executives will continue to encourage women to join the Marine Corps.