Starbucks Gave A Free Cup of Coffee to Every U.S. Service Member in Afghanistan 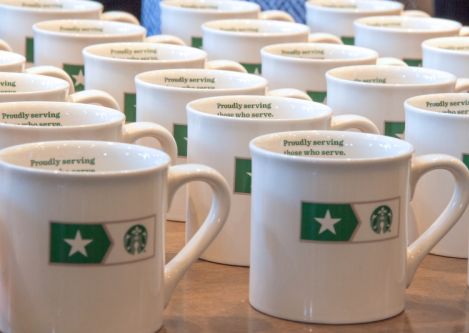 Starbucks recently revealed that during the holidays last year, it partnered with the USO to give a free cup of coffee to every American service member in Afghanistan- all 9,800.

While Starbucks did not share this news until this year for security reasons, Starbucks hoped that this special holiday delivery could bring a little bit of home to U.S. service members overseas.

The Seattle-based coffee company worked with the USO to deliver thousands of Starbucks VIA Ready Brew three-pack servings to Bagram Airfield. From there, the USO and Starbucks ensured that the coffee packages made it to service members throughout Afghanistan.

The Starbucks Armed Forces Network supports members of the military by regularly organizing care packages for deployed troops and providing a support network for Starbucks partners (employees) who are part of the military community.