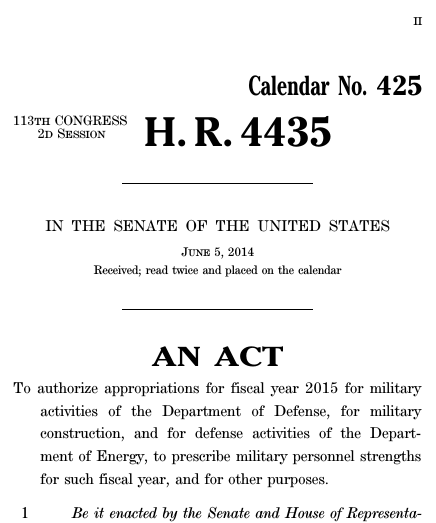 Effective next year, service members will likely pay a higher co-pay on prescriptions bought off base, get a lower basic housing subsidy (BAH), and receive a smaller pay raise under an agreement reached between the House and Senate armed services committees on the 2015 National Defense Authorization Act (NDAA).

The bill, which is not yet law, passed in the House on May 22, 2014 and will be put to a vote in the Senate. It encompasses the proposed budget for a wide range of military costs, including but not limited to, service member pay and benefits.

However, this bill comes after the Pentagon requested certain budget cuts in order to balance their budget in the coming years. The budget for military personnel costs is currently set at $177 billion for 2015, which accounts for more than a third of the Pentagon’s $496 billion non-war budget. The Congressional Budget Office identified personnel costs as having the steepest growth rate within the Pentagon’s previous budgets. The CBO states that from 2000 to 2014, personnel costs increased by 46%.

To curb these costs, the Department of Defense originally asked for a 5% reduction to BAH over three years and a $30 increase in drug fees over a decade. The Congressional agreement includes higher co-pays for prescriptions filled at off-base pharmacies, a decrease on BAH allowances by 1 percent in 2015, and a decrease of the statutory 1.8% troop pay raise to 1%.

While these decisions were the joint effort of the Pentagon and members of Congress, several organizations that lobby on behalf of service members and veterans were not pleased with the results. Many of these organizations support a balanced Pentagon budget but are not in favor of spending cuts in the form of military pay and benefits.

“Congress forgot, in their haste to pass a bill, that they promised not to balance the budget on the backs of our military. We’re asking why we have to continue to sacrifice, when some military families are already living in poverty. Military families should be the last to experience cuts.” – Lori Volkman, spokeswoman for Keep Your Promise

However, these benefits and allowances are still subject to some discretion and will not be entirely removed from the 2015 budget. According to the Library of Congress’ nonpartisan summary of the bill as passed by the House, Section 602 “directs that the rate of basic pay for commissioned officers of the Uniformed Services in pay grades O-7 through O-10 during 2015 shall be determined by using the rate of pay for level II of the Executive Schedule in effect for 2014 (thus imposing a freeze on such rates of pay in 2015).” Further, section 611 “extends through December 31, 2015, bonus and special pay authorities for: (1) the Reserve Forces, (2) military health care professionals, (3) nuclear-qualified officers, and (4) other members of the Uniformed Services.”

To stay up-to-date on this bill’s provisions, as well as any changes, you can read the Senate committee’s version and the House committee’s version, and you can track the bill’s progress online at GovTrack.us. You can also read the most recent version of the bill in its entirety. If you wish to call your Senator or Congressperson about this bill, its full title is “H.R. 4435: Howard P. “Buck” McKeon National Defense Authorization Act for Fiscal Year 2015.”