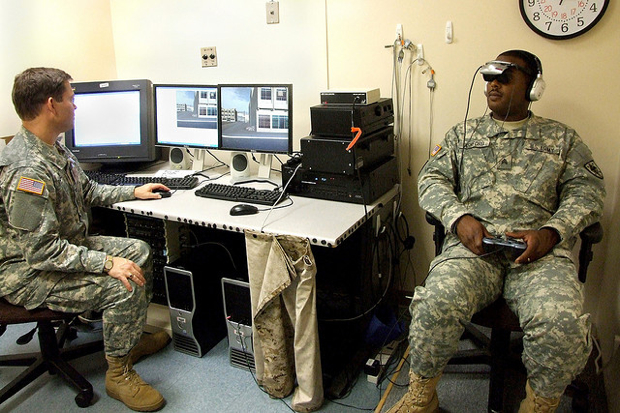 Research conducted at The University of Southern California Institute for Creative Technologies shows that virtual reality is an effective measure to treat Post Traumatic Stress Disorder.

Post Traumatic Stress Disorder or PTSD, is a anxiety disorder that can occur after witnessing or experiencing extreme emotional and/or physical distress. All types of people suffer from PTSD, although its effects are more widely seen and discussed in military veterans.

Virtual reality is technology used typically in video games and simulates real world events in a controlled virtual environment. The technology allows therapists to recreate traumatic events that have happened in a persons life but also places the patient in a position to confront issues at their own pace. Also, placing them back in the traumatic setting is likely to reduce symptoms and triggers.

The current therapy system consists of a series of virtual scenarios specifically designed to represent Afghan and Iraqi city and desert road environments, as well as scenarios relevant to combat medics.

In 2008, Dr. Robert N. McLay author of the book At War with PTSD: Battling Post Traumatic Stress Disorder With Virtual Reality, tested the effectiveness of VR therapy on soldiers deployed in Iraq. He found that treating trauma head-on was essential but also that the future of treatment can help reduce stigma associated with the disorder.

Lead researcher, Dr. Skip Rizzo and his team have been testing this method since 2005 and has since been implemented at over 50 treatment facilities including military bases and VA hospitals.

USC researchers also created an avatar that will better assist social workers with talking to Iraq and Afghanistan war veterans about their experiences.