According to an unidentified woman (and witness) who spoke to Military.com and took the photographs above, the USS Arizona Memorial — the hallowed structure that rests over the ship sunk by Japanese warplanes on that infamous day in 1941 — was struck by the USNS Mercy while the huge hospital ship (shown below) was trying to dock Wednesday in Pearl Harbor.

It’s unclear exactly what hit the commemorative floating structure (as well as the underwater wreckage), but people present for the “crash” say it was clear that they saw and heard the memorial being bumped — and maybe more.

“It went right over the dock,” the aforementioned woman told Military.com. “You could hear the metal crunching. My husband said you could see mud and water being kicked up. It backed up to within feet of hitting the white memorial building.” 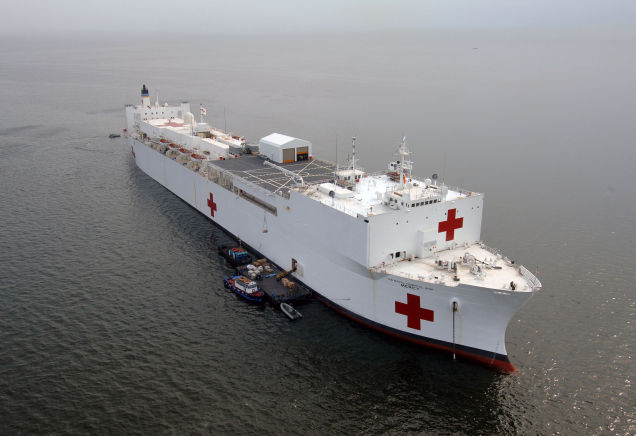 Visitor traffic to the WWII monument has been suspended as damage teams assess the structure and its surroundings, including the USS Arizona, which lies submerged beneath the memorial.

The USNS Mercy (T-AH-19) is a huge vessel, measuring 894 feet long and displacing just over 69,000 tons. Her and her sister ship, the USNS Comfort, have been America’s premier hospital ships for decades.

These massive floating hospitals house 1,000 patients and carry everything necessary to stock a modern hospital in a major metropolitan area. They have had a constant presence at major US conflicts abroad since their introduction into service and have also been used for natural disaster recovery efforts around the globe.

Are you a military veteran, first responder, teacher or student? Join ID.me for FREE to get exclusive deals and cash back.