This Old Article From 1956 Pretty Much Predicted Today’s Soldier

Predicting the future is a tough business. The Madame Marie’s of the world somehow stay afloat financially (maybe crystal balls aren’t real crystal?) but the rest of us tend to founder when taking stabs at what might happen next. Trying to estimate what will happen decades and half centuries in advance is even trickier.

For instance, Popular Mechanics forecasted in 1951 that we’d all have personal helicopters by now — vehicles called “Hiller Hornets.”

In 1955, a president of a vacuum company predicted that by 1965 America would be using nuclear-powered instruments to clean their rugs.

Robert Heinlein, a celebrated science fiction writer, penned in 1952 that “the most important military fact of this century is that there is no way to repel an attack from outer space.”

United States Army Lieutenant Robert R. Rigg was also writing things in the 1950s, and in 1956 he published a piece in Army Magazine making prognostications about what the soldier of the future (now, basically) would be wearing. And doing. 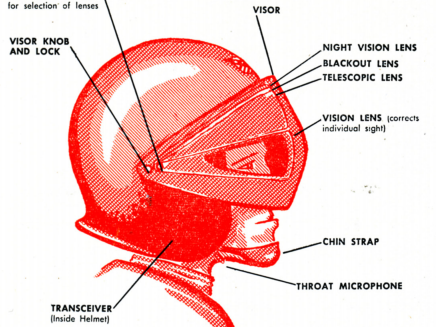 “The FutureArmy soldier … will gain independence and action from an ultra-small radio transmitter and receiver. This transceiver will … place the individual soldier in communication with all other members of his fighting team.”

“The soldier will be able to … change darkness into day with one flick of a wrist on the infrared dial and switch.”

“Projected into battle-zone by three dimensional transport devices, this futuristic soldier will be able to arrive and surprise his enemy with a force and suddenness never before known.”

“To help you … flying artillery and guided missiles will bracket the region and seal it off by striking any aggressor reinforcements moving to the scene.”

“FutureArmy soldiers will wait by their machines of war as these fantastic robot spies, called Owls, report on the location of enemy concentrations and installations.”

Rigg spent a good chunk of the previous decade as an assistant military attache in China, and Korea. He published another piece after getting a rare opportunity to spend time with a commander from the People’s Liberation Army. He detailed some ghastly stuff about the soldiers’ everyday.

“Very strict. The soldier is watched even for his opinions. Reckless driving of a vehicle an merit death.”

“Very few. The average private cannot get married. A soldier is fortunate if he gets a furlough every two years.”

Someone is selling the original hardcover on Amazon as an “artifact.” They include the line “written at the time America was shocked by the defeat of its troops in far North Korea by Mao’s Chinese Regular Army.”