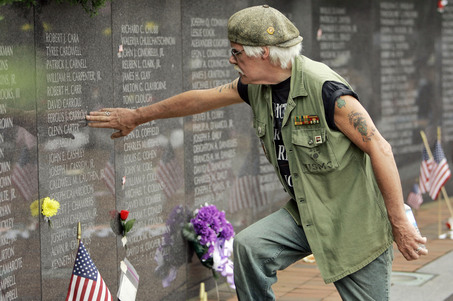 Decades after the Vietnam War, several veterans who fought in the conflict and were denied benefits due to less than honorable discharges may be eligible for upgrades based on new guidelines made by the Department of Defense.

Last month, Defense Secretary Chuck Hagel ordered that boards in charge of corrections of military and naval records begin to “fully and carefully consider every petition based on PTSD brought by each veteran”.

“Substantiate the existence of one or more symptoms of what is now recognized as PTSD or a PTSD-related condition during the time of service, liberal consideration will be given to finding that PTSD existed at the time of service”

According to the Army Times, upgraded discharges for soldiers who received a less than honorable discharge could lead to the award of previously denied benefits, such as disability pay, separation pay and GI Bill eligibility.

PTSD was not recognized as a disorder by the medical profession until 1980, so many Vietnam vets who made PTSD claims were denied.

The suit estimated that nearly one-third of the 250,000 other-than-honorable discharges issued to Vietnam era veterans may have been PTSD-related.

These guidelines are being changed to ensure fairness and consistency across the Services.