Man Rips Up Homeless Vets Sign & You Won’t Believe Why!! 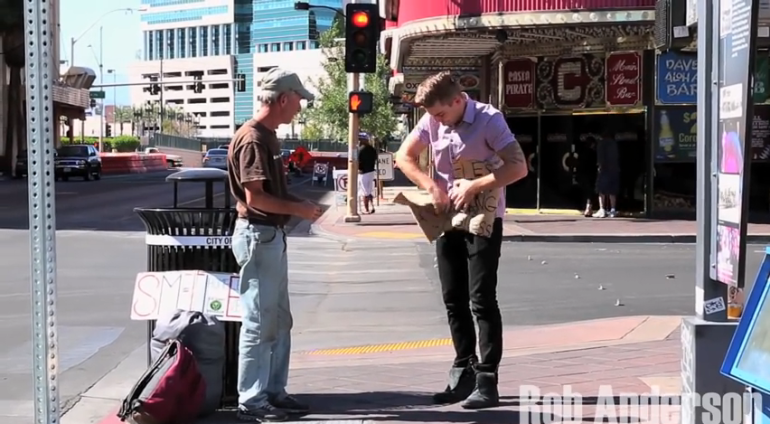 This definitely put a smile on our faces… at the end

After learning about a homeless military vet in Las Vegas named Alan McKracken who “just wanted to make people smile” even if he didn’t receive money in return, Rob Anderson a local magician and entertainer wanted to go check it out for himself to see if the rumors were true.

In the video you see Anderson approach McKracken, take his sign and draw dollar signs on it and asks “your sign says anything helps, does that help?” After mocking McKracken he proceeds to tear the sign into pieces. Throughout the exchange McKracken keeps calm and even asks if he can have the marker to make a new sign.

After the sign is in pieces, Anderson surprises  McKracken with a perfectly intact sign but with money attached to it!

With a big smile on his face, McKracken said “How did you do that? That’s so cool!”

But that wasn’t the only surprise Anderson had in mind.

After the video went viral, Anderson set up a GoFundMe page for McKracken to help him with an apartment, food and other basic necessities needed to get back on his feet.

I am blown away by the generosity I’ve seen from complete strangers towards Alan in the last 24 hours. If you’re a donor, thank you so much.