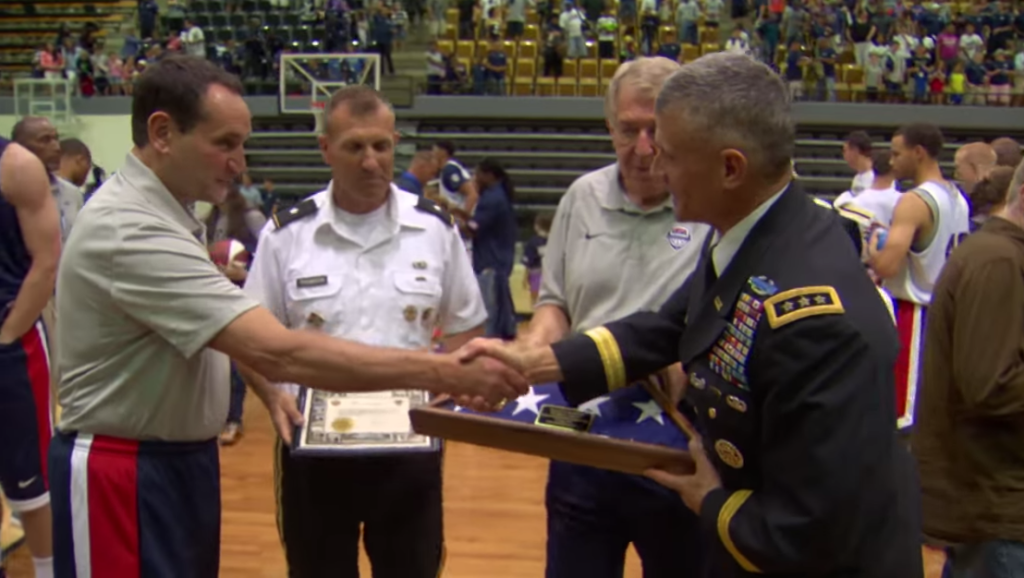 Kryzyzewski  or “Coach K” a former basketball player for and graduate of the United States Military Academy at West Point, is known for his tenure as head coach of the Duke Blue Devils mens basketball team. While at Duke he led the team to 11 Final Four appearances (three were consecutive), four NCAA championships, and 13 ACC Tournament championships.

Mike Krzyzewski was inducted into West Point’s sports hall of fame before the Army v. Duke basketball game in 2009.

He also led the USA Men’s national basketball team to two gold medals in 2008 and 2012.

Kryzyzewski will receive the Marshall Medal for his continued and generous support of our men and women in uniform. He and his family have provided over $10,000 in gifts to military families at Christmas time and established Hoops for Troops; a basketball program that provides basketball training and events for military children.

“As an exceptional patriot, Mike Krzyzewski is not only an American icon familiar to the nation while pacing on the sidelines during a Blue Devils basketball game, but he is also an extraordinary mentor to our nation’s youth – both military and civilian. He is acclaimed for successfully molding character, mentoring our young men and women, and developing leadership through his example and athletic programs,” AUSA President Gen. Gordon R. Sullivan, USA, Ret., said in a statement.

On January 25, 2014, Krzyzewski became the second head coach of an NCAA mens basketball program to have 900 wins.

Check out the video of Coach K taking the USA Men’s Basketball team to visit West Point below: