Infographic Paints Picture of US Military Transition in Afghanistan

The United States recently announced the end of combat operations in Afghanistan. As a result, the 13-year long Operation Enduring Freedom has been replaced by Operation Resolute Support. To mark the shift, US-Forces Afghanistan released a detailed infographic that illustrates the logistics supporting the US military’s activities and man strength between January and December of 2014. 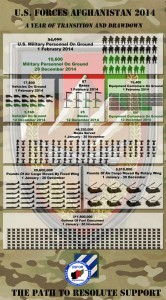 Courtesy of US Forces Afghanistan