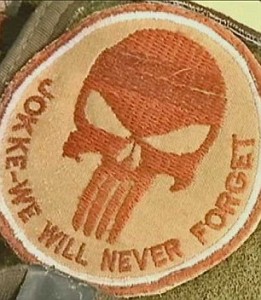 According to the UK’s Daily Mail, the Telemark Battalion — a top infantry unite of the Norwegian Army renowned for using the emblem (pictured above) of a vicious fictional character — are on their way to Iraq to fight ISIS, otherwise known as the Islamic State.

While nothing new to the Scandinavian soldiers — they’ve been involved in the fight against the Taliban as part of a NATO-led security mission since 2003 — their time in the Middle East has been wrought with success, controversy and a stinging tragedy they’ve openly vowed to always remember.

When 22-year-old Claes Joachim Olsson, nicknamed “Jokke”, was killed by a Taliban roadside bomb in northwest Afghanistan in 2010, some of the members of the unit took to wearing patches featuring the comic Punisher logo and the words “Jokke- We Will Never Forget”.

The Punisher is a Marvel-created antihero who kills criminals and mobsters sporting a caricatured skull on his chest. While military leaders in the country subsequently banned the wearing of the patches, many of the troops reportedly still do anyway. Altogether it’s contributed to a rising, unabiding hatred for the Taliban that’s evident in the following video of company commander Major Rune Wenneberg referencing a symbolic hall in Norse mythology.

According to the Daily Mail, in the above footage Wenneberg reportedly says, “You are the predator. Taliban is the prey. To Valhalla!”

The battalion also caused a stir in 2010 when a handful of its soldiers were seen spray-painting their favorite logo on the houses and property of Afghan villagers they suspected to be Taliban.

As for now — beginning in April — around 50 of the Telemark troops will be sent to the city of Irbil in northern Iraq to train Kurdish forces in their fight against ISIS, while others will be headed to Baghdad in the hopes of “stemming an insurgency that controls large tracts” of the country as well as Syria.

Interestingly, Norwegian soldiers aren’t the only warriors blasting the Punisher skull into popular culture. Chris Kyle, the “American Sniper” himself, also sported a variation of the comic art (pictured below). 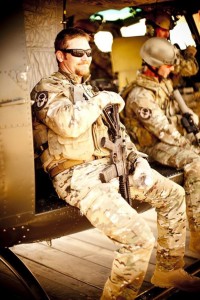