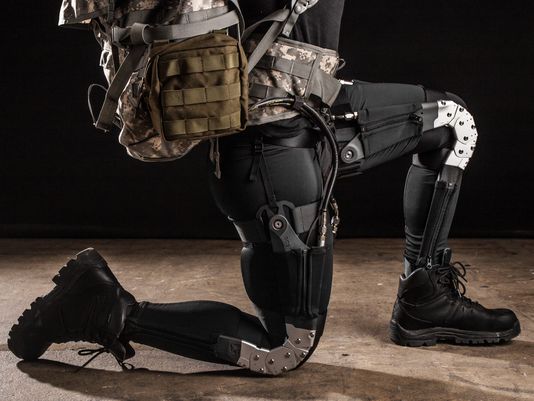 Iron Man will one day be a reality, and he will be a member of the United States military. The Defense Advanced Research Projects Agency (DARPA) is now in the second phase of prototyping super-human exosuits. Part of the Warrior Web program, these special exosuits are meant to help soldiers carry excessive weights and while mitigating injuries.

DARPA falls within the purview of the Pentagon, and the organization funds thousands of strategic innovative research projects each year. The agency also oversees the Warrior Web program responsible for designing, developing and testing reinforced exosuits for various branches of the U.S. military. DARPA hopes these futuristic lightweight devices will “prevent and reduce musculoskeletal injuries caused by dynamic events typically found in the warfighter’s environment.” The end result will likely be a “wearable robot” and resemble a reinforced wetsuit, allowing soldiers to carry in excess of 100 pounds while moving faster that they otherwise could have. Researchers also believe the finished product could also help injured soldiers after they return home.

There are several ways to create a machine that mimics walking while carrying heavy loads, and several different researchers and organizations currently developing various prototypes. Arizona State and the Wyss Institute for Biologically Inspired Engineering at Harvard are just two of the institutions that have produced prototypes, each approaching the machine from different scientific angles.

After a prototype is ready, the product is tested at the Soldier Performance and Equipment Advanced Research (SPEAR) facility in Maryland. During the first phase, also called Task A, nine suit prototypes went through exhaustive testing as “test soldiers” wore the suits and simulated different actions a soldier might perform daily. During the second phase, or Task B, four different suits will prove themselves – or not – during another round of live testing and simulations.

While the results are yet unknown, Warrior Web is well on its way to building a wearable, comfortable super suit for entire units on the front lines and at home.