But, sometimes, the universe “rights” itself. And life is good again.

That’s exactly what happened Athens, Georgia, after authorities announced Monday that a United States military veteran — Michael Hammons, 46 — had all criminal charges dropped against him after he broke a car window to free a suffering dog from the deadly accumulating heat inside the vehicle.

This heroic action all took place on May 9, when the vet (who fought in the first Iraq War) saw a dog trapped inside the greenhouse inferno that was a baking Ford Mustang sitting in the direct reach of the ruthless Georgia sun at an Athens-area shopping center.

According to eyewitnesses (and the photograph below) he broke the window and freed the pooch by smashing the glass with a piece of his wife’s wheelchair. 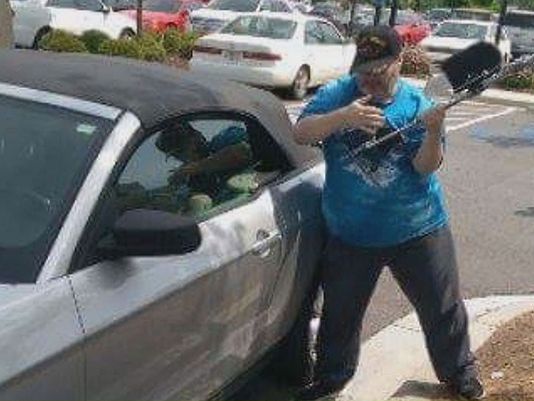 A number of mall patrons had been concerned about the Yorkie inside the vehicle, and called police.

After Hammons deed, however, the owner returned and claimed she had only been gone five minutes. She then insisted that Hammons be arrested for causing damage to her car.

Under current Georgian law, it’s legal to break a car window to rescue a human, but not an animal.

On Wednesday, People for the Ethical Treatment of Animals said it will be awarding Hammons its Compassionate Action Award. PETA officials said temperatures inside a parked car can jump quickly to 100 to 120 degrees — even on a mild, 78-degree day like Saturday.

“The laws need to be changed to protect the animals, not necessarily the people,” said Mark Martin, a pet store owner who rallied around Hammons’ cause. “We are the voices for the animals; they can’t speak for themselves.”

A local Ford dealer offered to replace the smashed car window for free.

Ken Mauldin, district attorney for the Superior Court of Athens-Clarke and Oconee counties, said the car’s owner agreed with his decision to drop the charges.