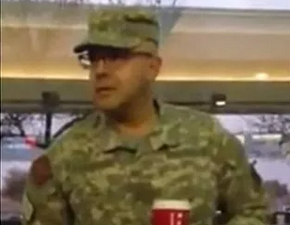 This is getting out of hand.

A California man was recently caught stealing valor at a Fresno airport after Christian Parmer, a former U.S. Army Specialist, stopped the man after noticing several things wrong with his uniform.

Parmer told KMPH News that off camera the man said he was Army EOD, and he walked away until he realized the man had a confederate flag on the shoulder of his uniform so he came back and asked questions.

Once Parmer started filming, the man’s story changed. He claimed the uniform belonged to his stepson, and he had thrown it on because he had nothing else to wear to bring his father to the airport.

Airport police later got involved and after questioning the man, asked him to leave the premises.

A Starbucks employee later confirmed he received 20% discount off his cup of coffee, a discount that is given to all active duty service members.

Watch the video for more of the story.