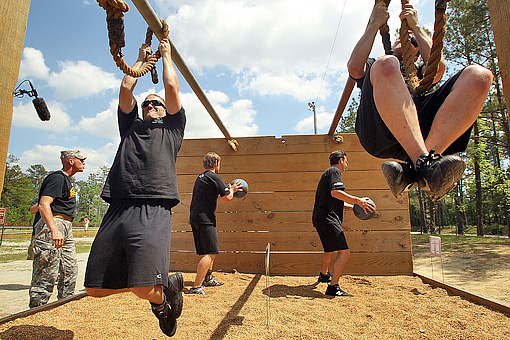 If you were ever wondered what it’s like to be a Navy SEAL, now you can get a glimpse by participating in the BattleFrog Obstacle Course.

Founded by former Navy SEAL Don Mann, BattleFrog, which began in January, is a replica course designed after BUD/S or Basic Underwater Demolition/ SEAL training – the six-month course required for recognition as a U.S. Navy SEAL.

According to the BattleFrog website, the founding SEALs acknowledge that in order to complete the team course you have to have strong leaders, like George Washington or the quarterback of a football team.

During the 15k or 9.5 mile running course, participants can expect to go through mines, run up and down hills, and climb 12 and 16-foot walls in order to successfully complete the training.

Don Mann told the Post-Gazette the obstacle course will be a “gut check” and will require athletes to have not only endurance but “a great set of legs”.

And for the people who want to participate but don’t have the endurance and strength of a Navy SEAL, there will be a 5K course featuring 15 obstacles as well as two courses for kids ages 4 and up.

According to the Post-Gazette, mud race/ obstacle course training is one of the fastest growing American sports, with nearly 3 million people participating in 2013.

This year the event will only take place in Pittsburgh and Miami, but next year Mann is expanding the course to take place in Houston, Dallas, and New England amongst other U.S cities.

To learn more about becoming the next BattleFrog champion in your city visit http://www.battlefrogseries.com.