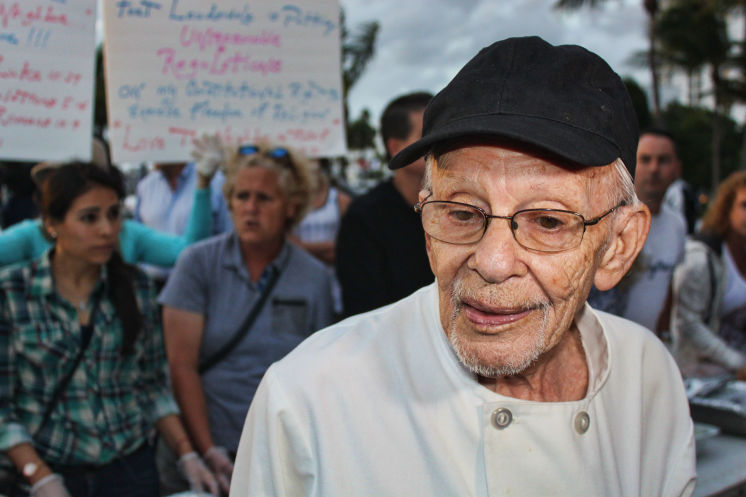 Arnold Abbott is guilty of being a good person – and in Florida, that’s a crime.

Many people have reacted after hearing the story of Arnold Abbott, a 90-year-old WWII veteran and chef who has been arrested twice in Florida for feeding the homeless.

Abbott and two other men were charged with feeding the homeless in public which is illegal according to a Ft. Lauderdale ordinance that took effect earlier this year which prohibits public food sharing.

All three men face up to two months in jail and a $500 fine.

Although this particular story has gained a lot of media attention, a life of doing good deeds isn’t new for Abbott. He’s been feeding homeless people in Florida through his Love Thy Neighbor nonprofit organization for over 20 years – as well as organizing an annual Christmas party for homeless children and opening a culinary school to provide jobs for the homeless.

“I’ve been fighting for the underdog all my life, so this is nothing new,” Abbott told Reuters.

According to the National Coalition for the Homeless, Ft. Lauderdale is now one of 22 cities that has successfully passed legislation that prevents food sharing and 10 more have similar rules under consideration.

Fort Lauderdale Mayor John P. Seiler addressed the issue in a statement stating that Abbott’s actions are technically not illegal.

“The ordinance does not prohibit feeding the homeless; it regulates the activity in order to ensure it is carried out in an appropriate, organized, clean and healthy manner”.

This isn’t the first time Abbott and the Ft.Lauderdale police have had an exchange over his food sharing. In 1999, he successfully sued the city for banning him from feeding homeless people on the beach.

“I’m going to have to go to court again and sue the city of Fort Lauderdale — a beautiful city,” said Abbott. “These are the poorest of the poor, they have nothing, they don’t have a roof over their heads. How do you turn them away?”

Check out social media reactions and more of the story below

I don’t want to live in a world where a 90-year-old man is arrested for feeding the homeless. Disgusting @FLPD411 http://t.co/kvytZIwidR

@thinkprogress God bless this man…arrested for showing compassion; what kind of nation are we becoming?

@Slate Wow… this is just… wow. There’s no way this really happened. I’d swear this was an @TheOnion article

@Slate – things are turning crazy, bonkers! Where is our compassion for those less fortunate than ourselves. Politics

This nation hates poverty, so they address it by criminalizing the poor instead of attacking issues that lead to poverty #murica