No, This Isn’t a Photo of Vietnam Soldiers

Perhaps you have seen this meme cross your newsfeed: 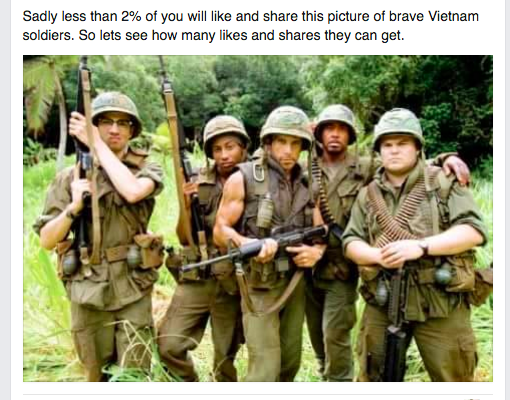 “Sadly, less than 2% of you will like and share this picture of brave Vietnam soldiers. So lets see how make likes and shares they can get.”

This is exactly the kind of meme that preys on users who want to help the troops in any small way they can, whether its through sharing a photo to show they care or donating to a veterans charity. The problem is that this isn’t a photo of “brave Vietnam soldiers.” This is a still from the 2008 comedy film Tropic Thunder.

Take a few seconds and look at the faces. The guy in the middle is Ben Stiller, the actor who starred in Zoolander and Night at the Museum. The guy on the far right? Jack Black of Tenacious D fame. The soldier standing between them? Robert Downey Jr. in black face.

Tropic Thunder is a movie about making a movie. A cantankerous group of Hollywood stars are cast in the film adaptation of a fictional Vietnam veteran’s memoir. When the actors are dropped in the jungle to make this movie, they find themselves in the middle of real combat zone. The film has an 83 percent rating on Rotten Tomatoes, and it generated $110.4 million in the box office.

The movie has a lot of layers. Every actor is playing a fictional actor playing another fictional character. But on no level are these guys actually portraying veterans.

The original poster of this meme might have been trying to make a joke, but not everyone is familiar with the movie. As a result, many kind-hearted, but foolish people fell for the trick.

The comments on the post are a mixed bag. 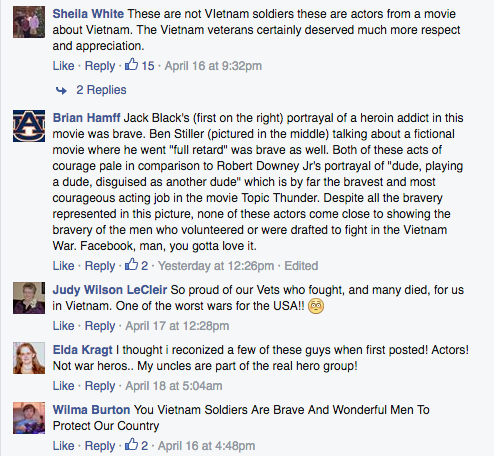 So if you see this meme floating around, clarify that these aren’t Vietnam soldiers. Maybe direct them to this list of iconic images from the Vietnam War so they can get en eyeful of real history.