A Guide to The Best Military-Themed Episodes of ‘The Simpsons’ 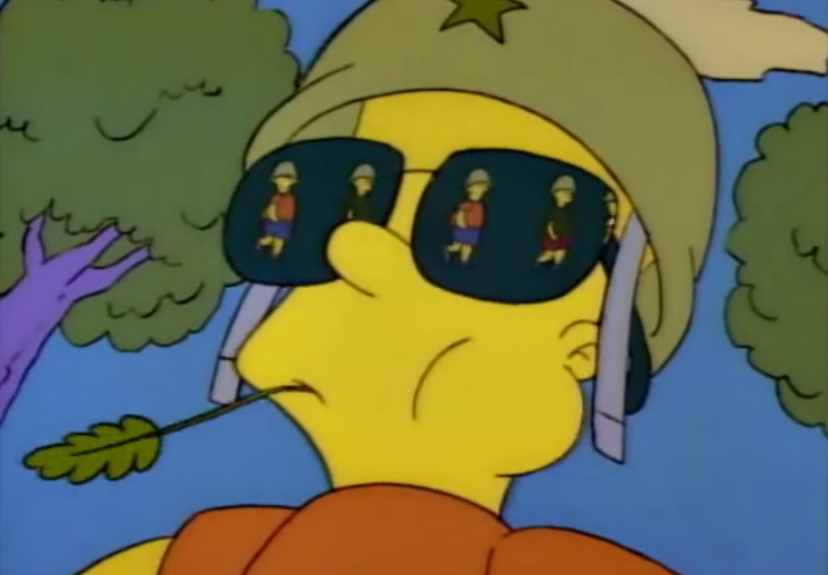 The whip-smart comedy and political commentary featured on The Simpsons has covered many topics in its 27-year run–sometimes with stunning accuracy. The animated family series even predicted that Donald Trump would run for president during an episode in the 1990s. The U.S. military, too, has had its fair share of ribbing.

As of this post, the show has aired 596 episodes. We sifted through them and found the best military-themed episodes in The Simpsons arsenal so you don’t have to. 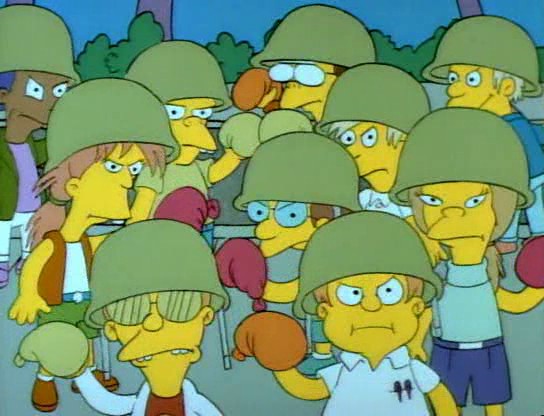 Plot Synopsis: When Bart gets into a schoolhouse feud with the new bully on the block, he decides to fight back. With a little help from a one-armed veteran at a local military antiques shop, Bart raises a small army and learns a thing or two about war.

Bart: Ladies and gentlemen, boys and girls, contrary to what you’ve just seen, war is neither glamorous nor fun. There are no winners, only losers. There are no good wars, with the following exceptions: The American Revolution, World War II and the Star Wars trilogy. If you’d like to learn more about war, there are lots of books in your library with cool, gory pictures. Well, good night, everybody. Peace, man.

Why you should watch it: This is episode marks the introduction of Nelson Muntz, the bully with the overbite who brought us the iconic “HA HA!” laugh. The content of the episode was also very daring in its time for its use of the term ‘family jewels’ and depiction of schoolyard violence. 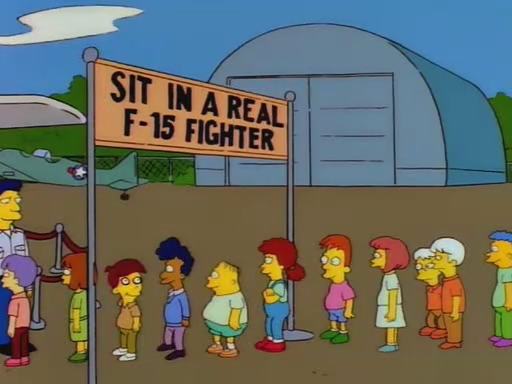 Plot Synopsis: Sideshow Bob’s newest scheme to get revenge on a 10 year-old involves dressing up as an airman, getting access to an Air Force base and stealing an atomic bomb. He ends up commandeering the Wright Brother’s original aircraft with Bart in tow for an aerial showdown.

Sideshow Bob: Ah, for the days when aviation was a gentleman’s pursuit back before every Joe sweat sock could wedge himself behind a lunch tray and jet off to Raleigh-Durham.

Why you should watch it: If the murderous rivalry between Bart and Sideshow Bob isn’t enough to hook you, the lampooning of the U.S. Air Force might. The episode also features Colonel Leslie Hapablap, a recurring character based on U.S. Air Force General Henry H. “Hap” Arnold.

Episode 150: Raging Abe Simpson and His Grumbling Grandson in “The Curse of the Flying Hellfish” 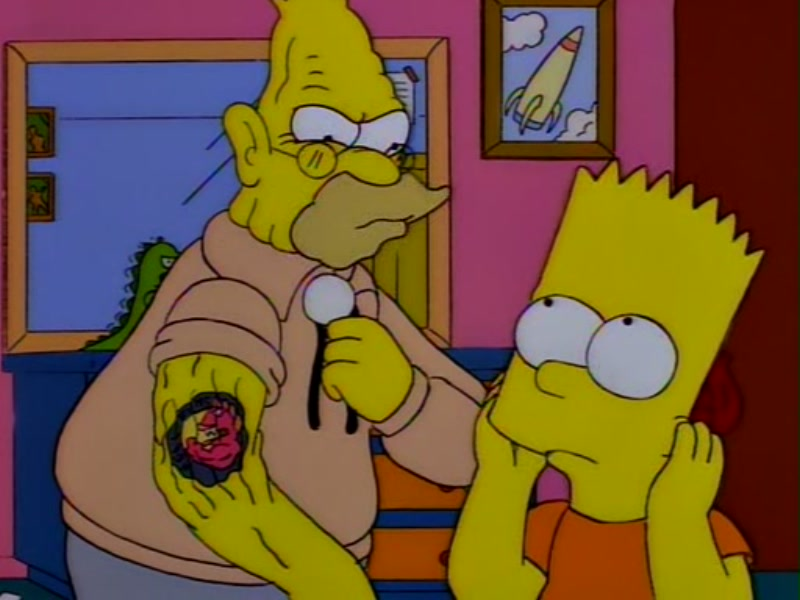 Plot Synopsis: During WWII, Grampa Simpson and Mr. Burns served together in the Flying Hellfish unit. After one of their war buddies dies and they become the last surviving members of the unit, Grampa and Burns race to claim the German treasure they hid in Springfield.

Grampa: Now, my story begins in 19-dickety-two. We had to say “dickety” cause that Kaiser had stolen our word “twenty”. I chased that rascal to get it back, but gave up after dickety-six miles…

Why you should watch it: This episode is based on true events. Valuables that disappeared during World War II really were resurfacing during the 1990s. Critics also lauded this episode for its animation, which included underwater effects heretofore unseen on The Simpsons. 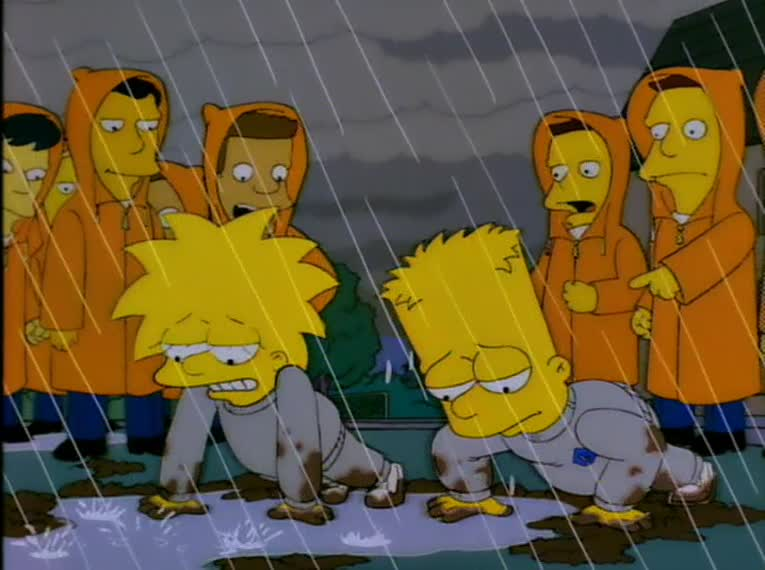 Plot Synopsis: When Bart is carted off to military school, Lisa decides to join him and become the academy’s first female student. While Bart is almost immediately accepted by the other cadets, Lisa becomes an outcast because she is a girl. The two siblings work together to train for the final exam and show everyone what they are made of.

Bart: (to Lisa) My killing teacher says I’m a natural.

Why you should watch it: Yup. What Lisa goes through in this episode echoes the recent introduction of women into combat MOSes. Last summer marked the first time a woman graduated from Army Ranger School, and many other women are signing up for the infantry for the first time. 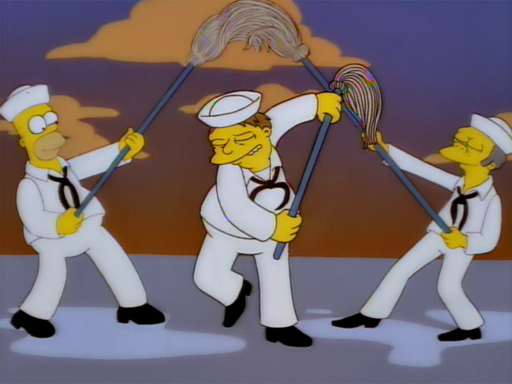 Synopsis: Homer enlists in the U.S. Naval Reserves after losing his job at the power plant. He ends up behind the wheel of a nuclear submarine, which he drives straight in Soviet (yes, Soviet) waters, causing an international incident. D’oh!

Homer: You know, Marge, joining the reserves was the best thing I ever did. I feel good about myself, I’m helping my country and later I’m going to get Gilligan’s autograph.

Why you should watch it: This is animated proof that Homer Simpson is a Navy veteran. It’s also a homage to Crimson Tide, a film about a U.S. submarine entering Russian waters that premiered shortly before this episode aired. 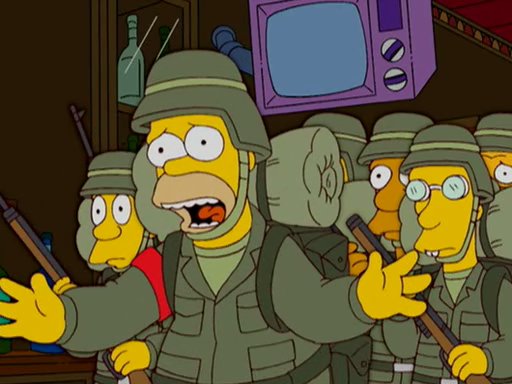 Synopsis: Homer joins the Army to prevent Bart’s recruitment. When he gets to training, he proves so incompetent that his superior officer plots to kill him. Homer and his unit flee, the Army declares martial law in Springfield and a standoff ensues.

Colonel: Yes, I can. Congress slipped it into the National Broccoli Day proclamation.

Why You Should Watch It: After it aired, the episode was panned for being “painfully unfunny” in its attempt to satirize the U.S. military. Ten years later, does the plot have anything new for viewers? Find out.