In the heat of the moment, anything can be a weapon. When one, unnamed Army Ranger came face to face with a grenade-wielding terrorist and couldn’t grab a knife, he reached for the next best thing: an MRE spoon.

The thrilling tale of one man and his spoon was first shared on Grunt Stuff. According to the blog post, the story has been corroborated by multiple witnesses who saw Checkhov’s spoon with their own eyes. While the blog doesn’t give out any names to protect that Ranger’s identity, this story is so good that we can’t help but hope every word is true. 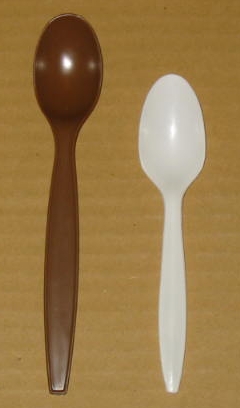 For those who don’t know the singular delight of Meals, Read to Eat, an MRE spoon is similar to any other plastic spoon. It’s not exactly known for having sharp edges, but the plastic is sturdy enough to puncture more than stale crackers.

“It’s about time someone put those spoons to good use,” post author Garndog writes.

The scene is set in Iraq after a team of Rangers set out to clear a building of enemy combatants. Once they breach the building, they find a handful of militants waiting for them armed to the teeth. After exchanging gunfire, the Rangers manage to eliminate all but one militant, who reaches for a grenade and moves to pull out the pin.

Seeing this, one Ranger leaps into action.

Being only feet away, our ranger buddy’s instincts and training took over. He rushed the enemy, immediately engaging in hand to hand combat. As they wrestle, this ranger can’t seem to get to his knife due to all of his gear being in the way.  Again, without hesitation, he reaches for the first solid object he could get his hands on; an MRE spoon!

After grabbing the spoon, he began stabbing the enemy in the neck until he was dead.

The Ranger spooned a terrorist, and walked away not only with his life and the lives of his friends, but with a great story.