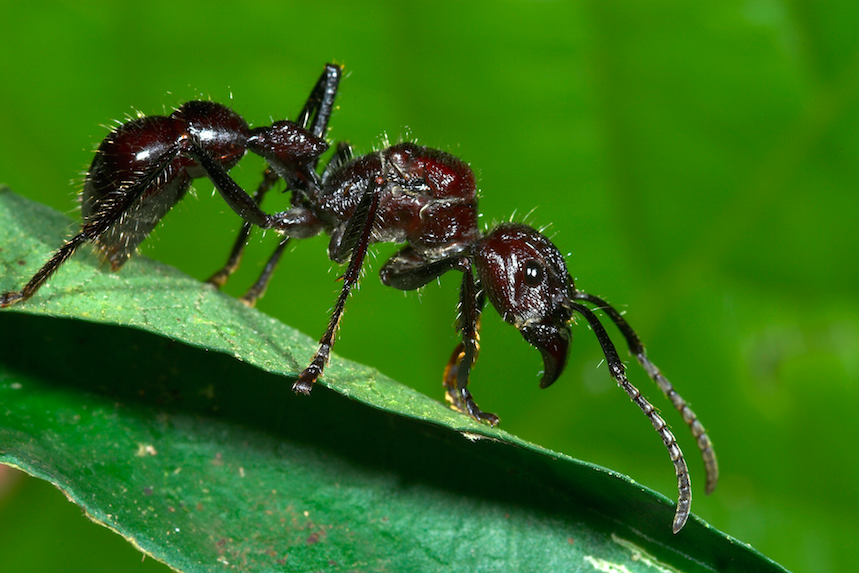 A bullet ant is a carnivorous insect found in rainforests from Nicaragua all the way to Paraguay in South America. It’s official name is paraponera clavata but it’s also referred to as the lesser giant hunting ant or the conga ant.

It got the “bullet ant” name not because it looks like one but because people compared its infamous sting to getting shot, as in the pain was greater than or equal to a manmade metallic projectile piercing your body after exploding from a pistol or handgun.

Dr. Justin Schmidt, an American entomologist and researcher, devised an index some years ago for measuring how much an insect’s sting hurts. It’s aptly called the Schmidt Sting Pain Index. According to it, the bullet ant’s prick tops all, edging out the tarantula hawk wasp by a nose with a rating of “4+”.

Here’s Schmidt himself telling Esquire how it felt the one time he mistakenly got stung by the ferocious jungle insect:

I had a big jar in my collecting bag and I was trying to pick them up with 12-inch long forceps, a great big monster tool, but the ants were sticky, which surprised me, because big ants are usually clumsy and don’t climb very well. Bullet ants are agile in spite of being huge–up to an inch–and their feet can stick to just about anything. They were getting riled up by all the movement and were working their way up the forceps to where I was. They seemed to know that the forceps were not the real target, that whatever was at the top was the goal. I was multi-tasking, looking around on the ground to make sure I wasn’t getting outflanked by any ants. Sooner or later, I goofed. One of them got up the foreceps and stung me on my finger.

That really shuts you down. It really felt like a bullet. It was instantaneous, almost even before it stung me. It was absolutely riveting. There were huge waves and crescendos of burning pain—a tsunami of pain coming out of my finger. The tsunami would crash as they do on the beach, then recede a little bit, then crash again. It wasn’t just two or three of these waves. It continued for around 12 hours. Crash. Recede. Crash. It was absolutely excruciating. There wasn’t much I could do except be aware of it and groan. But I didn’t lose the ant. I was dedicated enough that I got it into the jar.

Also, here’s footage of an Amazon tribe testing their warriors’ manhood in a rite of passage that involves bullet ants and a special, draconian pair of gloves: