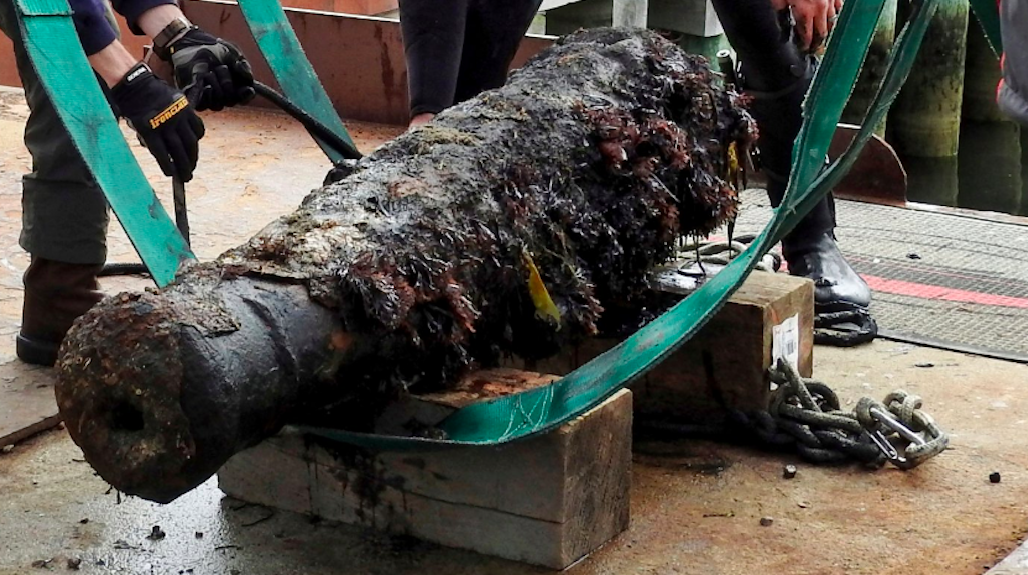 On the bottom of the sea floor, just off the coast of Rhode Island, rested a schooner. It stayed there unbeknownst to anyone living, for what experts believe to be a little over two hundred years, until one day in 2005, when recreational divers from Connecticut came upon it.

Recently, the first item from the shipwreck was brought up out of the water and onto the surface.

United States Navy archeologists are now in the process of examining it. They hope to prove that it’s from a ship — the USS Revenge — that once belonged to a beloved War of 1812 hero.

In 1811, history has it that Perry’s vessel became entangled in a reef off Watch Hill. He ordered to jettison most everything that weighed the ship down, save his men, but it didn’t matter in the end. The Revenge sunk, and has been dormant below the waves for a couple of centuries.

The big gun is now being cleaned and readied at a conversation lab at Washington Navy Yard so it can be properly studied.

“To see it finally break the surface after being down there for 206 years, it was just really, really cool,” said one of the divers, Charlie Buffum, to the Associated Press.

More from the AP:

Perry’s career languished after the wreck until he was sent to the Great Lakes during the War of 1812. He’s remembered as the Hero of Lake Erie for defeating the British navy. He was famous for reporting simply, “We have met the enemy and they are ours,” after the decisive battle in 1813.

Archaeologists will look for foundry marks on the cannon that could identify it. Even if there are none, Schwarz said they could corroborate the identity using historical documents.

The cannon is 5.5 feet (1.7 meters) long and weighs over 1,000 pounds (450 kilograms). Schwarz estimates the conservation process will take about two years.

The Navy says it plans on exploring the site more in the future. It’s protected from any “unauthorized disturbance” thanks to the Sunken Military Craft Act.

Buffum, who owns a brewery in New England, says he’s working on a speciality beer to commemorate the discovery.

The cannon is expected to be one day be displayed at a museum.