Here’s a U.S. Marine Gliding Down a Bannister at Saddam’s Palace

When you just helped topple one of the most ruthless and terrifyingly opulent dictators on the planet — and you’re in one of his luster-strewn castles of gaud — it’s best practice to take a victory lap.

That can come in many forms, of course.

In this American troop’s case, it showed itself at the top of an ornate staircase — the bannister, specifically. At that point, just before he mounted said handrail most likely constructed from elephant tusks and peasant tears, it probably looked like what Space Mountain looks like to an 11-year-old child upon their very first visit to DisneyWorld. Or, it was this mirage-like vision, glowing and nondescript, like the shining contents that lay neatly inside that Pulp Fiction briefcase, the one belonging to Marcellus Wallace, or the Shroud of Turin, or something.

You get the idea. Anyway, behold: 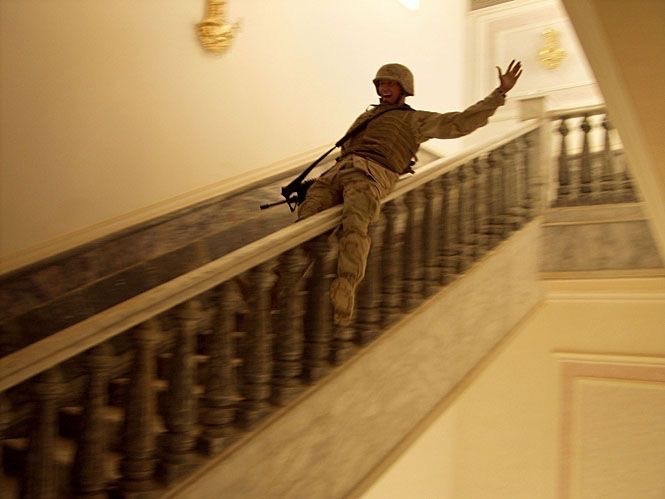 This photograph was posted on a popular Reddit thread (frequented by veterans and enthusiasts alike) and was met with some lively comments.

This one is by far our favorite:

We can only hope the paper was soft like the fruit of an Egyptian’s loom and, as forgiving as an inebriated Trappist monk.