Congressman to Extinguish Drones With Flamethrowers 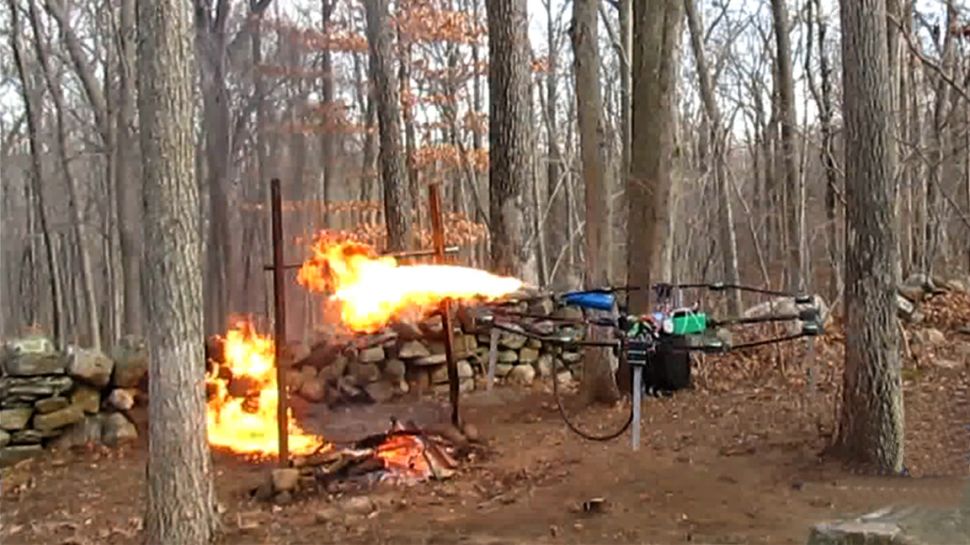 Remember that spunky teen who attached a handgun to his drone and posted a video of his experiment on Youtube? Remember how shortly after the video went viral, the government and law enforcement showed up at that teen’s door to stop him from weaponizing drones? Not only did that teen not learn his lesson, but he took his experiment to the next level.

In December, the Connecticut-based YouTuber Austin Haughwout followed up on his ‘Flying Gun’ video by attaching a flamethrower to a drone and using it to roast a holiday turkey.

Haughwout’s fiery antics drew the attention of law enforcement, but in a strange twist his flying flamethrower was actual more legal than his flying gun.

Flamethrowers are not classified as firearms by the Bureau of Tobacco, Alcohol and Firearms. Both of Haughwout’s videos were filmed on his family’s private land and with his legally owned weapons, so from a legal standpoint he is in the clear.

Connecticut lawmakers, however, were spurred by these videos to ban drones that wield firearms AND flamethrowers.

Rep. Christie Carpino, who is sponsoring the law to ban armed drones, told CNN Money that drones like this hold dangerous implications for the public.

“Actions like this are reckless and dangerous,” Carpino said. “They put people and property in harm’s way. The videos highlight the fact that technology sometimes gets ahead of the law. There’s no valid reason to weaponize drones.”

State laws banning weaponized drones do not affect military bases that develop and launch military drones. Though the U.S. military is already attaching guns and bombs to its drones, it won’t do the same with flamethrowers because it has already removed fire weapons from its own arsenal.

During World War II, both the Allies and Axis powers sprayed flames on the battlefield to send their adversaries scrambling in terror. In the Korean and Vietnam wars, Marines used mounted flamethrowers on armored vehicles to burn a war path through the jungle and incinerate enemies. The U.S. military stopped using fire weapons in 1978 because the public found them too horrifying. The United Nations adopted a resolution to ban flamethrowers and other needlessly violent weapons in 1983, and the U.S. ratified it in 2008.