In 1903, a physician who would one day become a WWI veteran and American Legion founder made a wager.

At the time, public opinion held that these new wheeled contraptions called ‘automobiles’ were a passing fad that would plummet in popularity the moment the novelty wore off. Dr. Horatio Nelson Jackson, a car enthusiast, disagreed that automobiles would be anything other than revolutionary.

“I do not believe you can do today’s job with yesterday’s methods and be in business tomorrow,” Jackson famously said.

To prove that the automobile did have potential, Jackson bet $50 (about $1,317 in modern money) that he could drive a car across the United States. With his co-driver Sewall K. Crocker and his bulldog Bud, Jackson set off on the first transcontinental road trip in American history.

A Road Trip for the History Books

In this era, there were no paved highways, road maps or street signs. Their car didn’t even have a windshield. All three passengers, including Bud the dog, wore goggles to keep the dust out of their eyes. 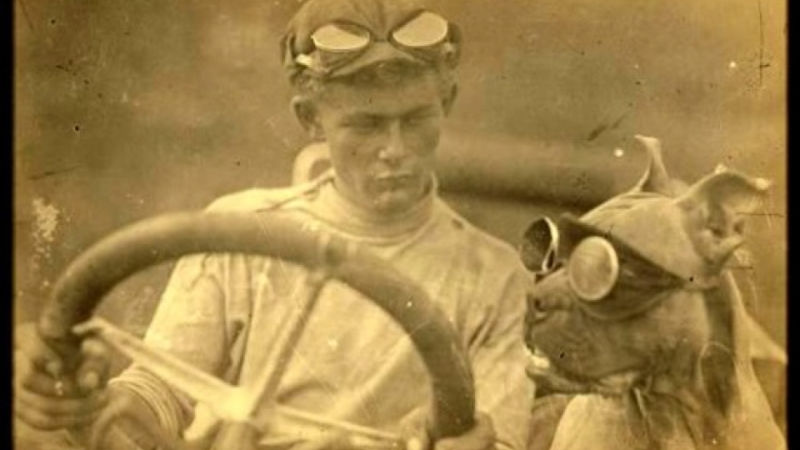 According to PBS, Jackson started his trip in San Francisco and headed towards New York City.

His car, which he christened the Vermont in honor of his home state, splashed through streams, got stuck in buffalo wallows, bounced over railroad trestles to cross major rivers, and frightened horses on the dusty trails. And as he moved eastward, his quest slowly became a national sensation, with huge crowds (tipped off by the telegraph of his approach) lining the streets of town as he whizzed through at 20 miles per hour. “It Startled the Natives,” one headline proclaimed; another announced “A Real Live Auto.”

Two companies sent their own cars to drive cross-country in order to steal Nelson’s publicity, but to no avail. After 63 days of driving, Jackson made it to the finish line first.

From Car Celebrity to WWI Veteran

Jackson’s story doesn’t end with his historic trip. At age 46, Jackson personally reached out to Theodore Roosevelt to circumvent the military’s age restrictions and serve during World War I. He served with the 79th Infantry Division and was wounded in the Battle of Montfaucon in 1917. By the end of the war, he had earned a Purple Heart, a Distinguished Service Cross, the Legion of Honour and the Croix de Guerre.

According to his citation for the Distinguished Service Cross, Jackson performed “extraordinary heroism” during the Battle of Montfaucon.

Constantly working in the face of heavy machine-gun and shell fire, Major Jackson was most devoted in his attention to the wounded, always present in the line of advance, directing the administering of first aid, and guiding the work of litter bearers. He remained on duty until severely wounded by high-explosive shells, when he was obliged to evacuate.

When the war ended, the WWI veteran remained in the Officer Reserve Corps. He was a founder of the American Legion, one of the most well-known and respected veterans nonprofits in the U.S.

The next time you or a loved one plan to see the country on a lengthy, winding road trip, try to imagine what it must have been like for a WWI veteran to blaze that trail more than a century ago.