“Nowadays with GPS you can pretty much do anything you want,” David Lanuti said. “And you can basically go through with a big Bush Hog.”

Lanuti, a Michigan native, spoke recently with one of the local newspapers in his corner of the Wolverine State, the Battle Creek Enquirer, about a noble idea he recently made a reality in time for the fall holiday season.

In charge of the family farm’s Halloween attractions (Fear the Farm zombie hunt, for example), the proud son of a World War II veteran decided to honor his roots, and portray his father the war hero on the very land that raised and fed their family.

So, he took the “big Bush Hog” (an enormous mower) and the aforementioned state-of-the-art GPS system, and created a corn maze in the likeness of his dad — 94-year-old Dr. Frank Lanuti, a retired hospital surgeon and a military pilot who flew numerous recon missions during the war that saved the free world from Nazi tyranny and Imperial Japan.

It’s a fitting tribute, and the younger Lanuti explained why. The pilots of today can now look down and see a pilot of yesteryear, in the many stalks that frame his visage.

Recently, the veteran got to see his tribute for the first time.

“He loved it,” David told the paper. 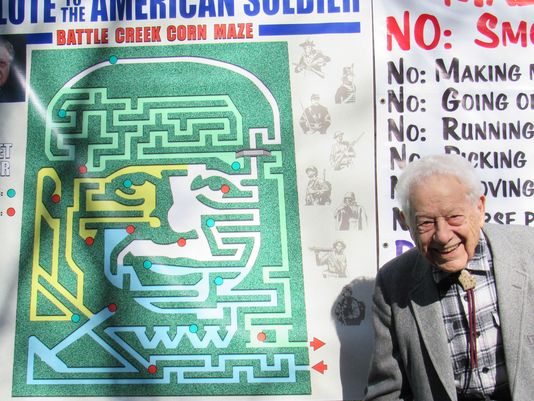