Robbie Tribbey was driving in northern Wisconsin with her son when she saw a female bald eagle devouring a carcass on the side of the road. Hearing the approach of Tribbey’s car, the startled bird attempted to fly away and instead struck Tribbey’s SUV.

“First I was scared to death, then I just wanted to cry because that poor bird,” Tribbey said.

It is a federal crime to harm or kill a bald eagle, and in this situation many would have abandoned the injured bird and took off in order to save their own hides from the law. Tribbey, however, could not leave the bald eagle to die. 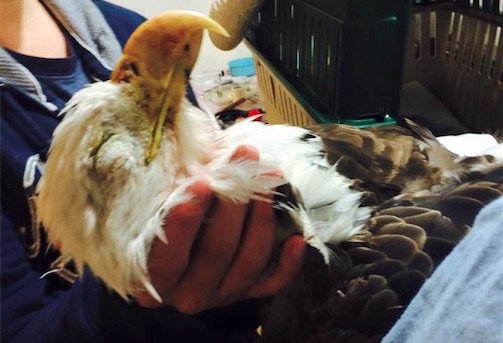 For the next three hours, Tribbey and her son transported the bird to the nearest wildlife rehabilitation center in Duluth, Wisconsin. To prevent the bird–who they nicknamed ‘America’–from getting spooked by other cars, the mother-son duo held up blankets to shield it from the images and sounds of passing traffic.

After giving American a preliminary medical exam, the wildlife rehab center realized that the bird needed to be x-rayed at the Raptor Center at the University of Minnesota. For a second time, Tribbey and her son volunteered to drive America across state lines so it could get the best treatment.

America has been x-rayed and is on the road to good health. She only sustained a few bruises in the accident, and she is already standing and eating on her own. In due time, America will spread her wings once more and take to the skies.

“I wanted to give my son a lesson in being kind and doing good,” Tribbey said. “I really want to see America released, and I would love to be there when that happens.”