For the fourth time this year, the Lake County, Florida resident awoke to the sound of gunshots after unknown assailants were yet again in his yard attempting to kill and maim the animals he keeps for therapeutic purposes.

After this most recent time, however, some promise sprouted in the quest to finally nab the violent criminals.

In the in the early morning hours of December 15, an armed Curtis chased away two men after his daughter got him up when she heard their dogs starting to bark.

“This is the first time we’ve actually caught them in the act,” the vet told local news station WESH.

Surveillance video successfully captured the crime in its gruesome detail (below is a screenshot of the footage). 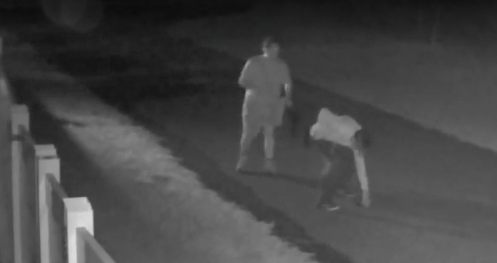 The aftermath, however, was almost too much for Curtis to handle. The morning light revealed that his goats “had been shot and mutilated” and his dog had been shot.

Apparently, the violence taken out on his menagerie is unfounded. No one knows why he’s being targeted.

“They’re more of a therapy to me. After getting out of the military, I have a hard time being around people, so I spend all my time with my animals.”

“I hope the cops are actually able to get a hold of them and put them away for it. It isn’t the first time it’s happening and it’s just got to stop.”

As of the publish date of this post, Curtis is offering a reward of $1,000 for anyone with information that leads to the arrest of the two suspects.