This is all that’s been reported thus far, via the Associated Press:

Pentagon: 2 Navy boats in Iranian custody but Iran tells US that crew will be returned ‘promptly’

UPDATE: Latest reports says 10 United States Navy sailors are being held by Iran at Farsi Island (located between the countries of Bahrain and Kuwait).

SECOND UPDATE: This from NPR:

About 10 sailors were detained by Iranian authorities on Tuesday as they sailed from Kuwait to Bahrain aboard two small riverine patrol boats, a senior defense official tells NPR’s Tom Bowman.

We still don’t know the reason why the boats were stopped but the official tells Tom that the U.S. has been in touch with the Iranians.

“The Americans were told the ‘safety and well being’ of the sailors is being maintained and they will ‘promptly be allowed to continue their journey,'” Tom reports. “The State Department has the lead in negotiating with Tehran.”

THIRD UPDATE: According to the Pentagon and the Washington Post, the boats in question are actually small watercraft called “riverine command boats” (one is pictured below). 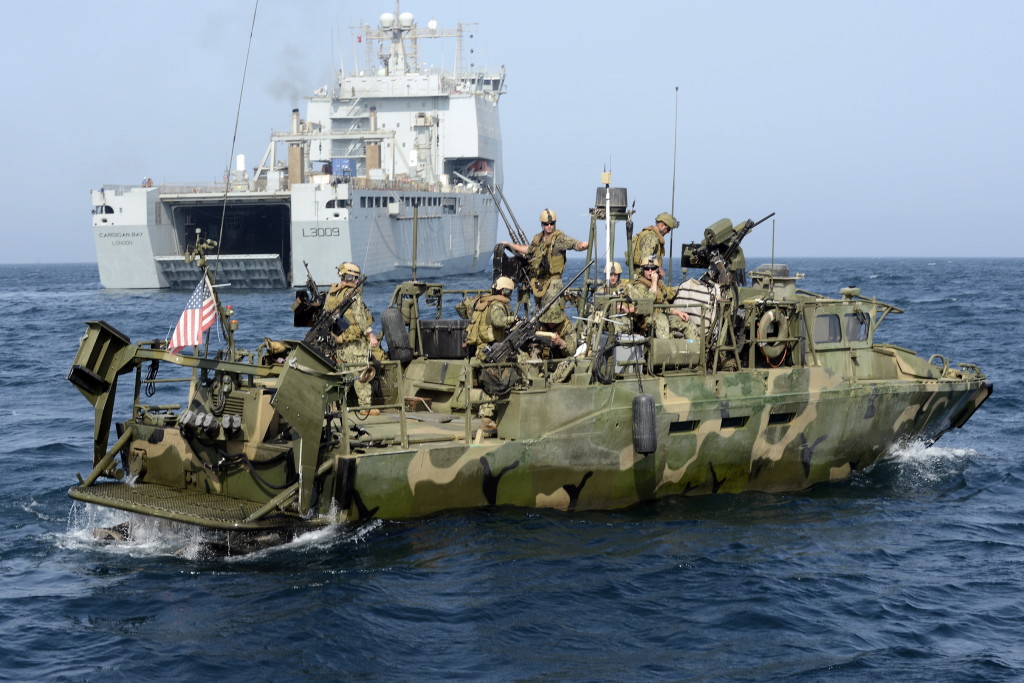 They’re built for speed and are about 50 feet long with the capability to be armed with light, medium and heavy weapons.

More on the situation from CNN:

A senior administration official said there is nothing to indicate this was a hostile act on the part of any entity in Iran, adding that the U.S. has received high-level assurances that the sailors would be released promptly.

There has been voice contact with the sailors captured in Iran, a senior U.S. official told CNN. The sailors — nine men and one women — said they expected to be released in the morning. The official said the plan is to meet the sailors in international waters after dawn, but did not say whether the two boats would be returned with the service members.

“Certainly, everybody should be aware of the fact we have been in touch with the Iranians and they have assured us that our sailors are safe and that they’ll be allowed to continue their journey promptly,” White House Press Secretary Josh Earnest told CNN’s Jake Tapper.

Apparently the two boats were in the area waiting to be refueled, according to at least one Pentagon official. There’s speculation now that they never received the necessary fill-up, ran out, and drifted.

CNN also reported that the crew is made up of nine male sailors and one female sailor.

FOURTH UPDATE: This from The New York Times:

… the Pentagon and the State Department said that one of the boats had experienced mechanical problems while en route from Kuwait to Bahrain on a routine mission. Administration officials said that the military had lost contact with the boats before they strayed into Iranian territorial waters.

The semiofficial Fars news agency in Iran said that the boats had illegally traveled more than a mile into Iranian waters near Farsi Island, the site of a major Iranian naval base. It said that members of the Islamic Revolutionary Guards Navy had confiscated GPS equipment, which would “prove that the American ships were ‘snooping’ around in Iranian waters.”

FIFTH UPDATE: According to state-owned Press TV, the U.S. sailors are being held and questioned by Iran’s Revolutionary Guards Corps (IRGC).

Alarmingly, the television report also said that the American military members “acted unprofessionally” upon their capture.

Just a few minutes prior on the Middle Eastern country’s television waves, an Iranian naval commander had stated that the sailors showed no resistance and that they’d be released as soon as soon as the IRGC were given “proper orders”.

SIXTH UPDATE: Senior defense official released a statement saying that the sailors will be freed, but failed to specify when.

“Earlier today, we lost contact with two small U.S. naval craft en route from Kuwait to Bahrain,” the official said in a statement. “We subsequently have been in communication with Iranian authorities, who have informed us of the safety and well-being of our personnel. We have received assurances the sailors will promptly be allowed to continue their journey.”

A rescue team from the Harry S. Truman Strike Group was dispatched to aid the stranded sailors, but Iran beat them to the punch and found the boats first. The strike group — including the nuclear-powered aircraft carrier USS Harry S. Truman — remain in the area.

All ten sailors detained by Iran after drifting into its national waters have been released and returned to the U.S. Navy. According to the Navy, all of the sailors were returned safely with no sign of harm.

The Revolutionary Guard published a statement on its website confirming that it had set the American crewmembers free. It also claimed to have accepted an apology from the United States, a fact that Vice President Joe Biden denies.

“After determining that their entry into Iran’s territorial waters was not intentional and their apology, the detained American sailors were released in international waters,” a statement posted online by the Guard said Wednesday.

Vice President Joe Biden, speaking later to “CBS This Morning,” denied that Americans made any apology.

“There’s nothing to apologize for,” Biden said. “When you have a problem with the boat, you apologize the boat had a problem? No, and there was no looking for any apology. This was just standard nautical practice.”