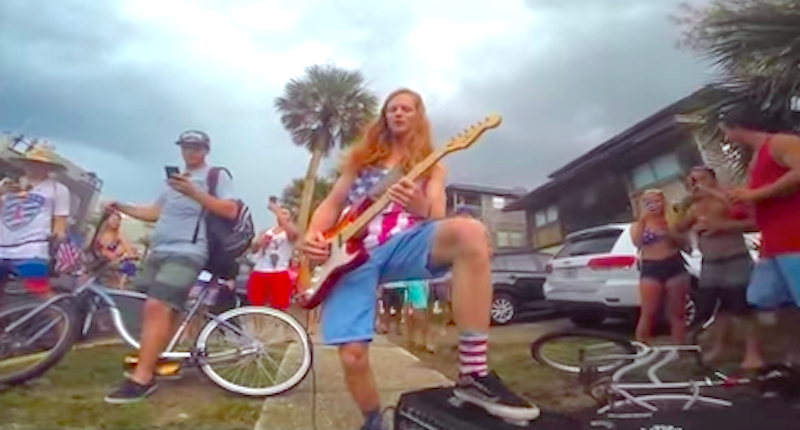 One man’s exultant moment of patriotism on Independence Day was ruined when local cops slapped cuffs on his wrists and dragged him to the police station.

Lane Pittman, a resident of Jacksonville, Fla., bust out his electric guitar to play a sick rendition of the Star-Spangled Banner at a public Fourth of July celebration. When police told him to play on the sidewalk instead of the street, Pittman obliged and moved. He then began to rock out in the most American way he knew.

This rendition of the Star-Spangled Banner drew a crowd of 200 people.

Shortly after the song concluded, Pittman was arrested for jamming too hard. He ended up receiving a written arrest for breaching the peace. To clear the air and reaffirm his innocent intentions, Pittman posted this video to Facebook and told his side of the story.

ATTENTION: I want to put this out before anyone hears anything differently. On July 4th, 2015, I was arrested by Neptune Beach police officers for playing the Star Spangled Banner (and a few seconds of Ted Nugent) on my guitar on 1st Street and Margaret in the 32266.I originally set up in the middle of the street but was told by an officer that I was going to go to jail if I kept playing and that I couldn’t play in the street. I then asked if I could just move it back to the side walk and the officer said yes. So I did.

After I got done, multiple officers came up to me and said they “just needed to talk to me.” I thought I was in the clear because the original officer told me it was okay to play on the sidewalk. I guess he failed to let his fellow officers know because they detained me and threatened to take me downtown for it.

I do not promote deliberately defying authority. I endorse good character and fun times within the system. I did not have a drop of alcohol in my system and was just trying to be as patriotic as I can, legally, on the day of our independence. So, before rumors spread, this is to clarify ANYTHING being said among the public. I have youth that I teach small groups at in church. I have youth that I coach. I would never, for a second, want them to think that intentionally rebelling against authority is something that I am for. Nor do I want the parents of those youth to think that.

I am very thankful for the support of THE greatest family, friends, and fans in the entire world. I love all of ya’ll more than you can ever know. Please feel free to share this video to anyone out there. AMERICA!!