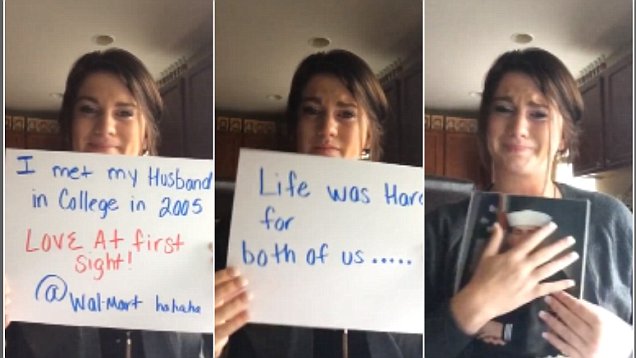 Have some tissues handy before you roll this clip.

Stephanie Lembo’s husband, Navy SEAL Anthony Lembo, succumbed to his post-traumatic stress disorder and committed suicide in 2010. Five years after his tragic death, Lembo opened up about the experience in a heartbreaking video that has been viewed more than 23 million times on Facebook since it was posted on National Suicide Awareness Day.

By holding up cards handwritten in blue marker, Lembo tells the story of how she and her husband fell in love at first sight and raised two children together. Anthony served several tours overseas with the Special Forces, and Lembo said he started showing signs of significant trauma at home.

“He wasn’t eating, nor sleeping,” Lembo shared in the video. “He would stutter his words. He would say things that made no sense at all.”

Things took a turn for the worse after Lembo suffered a miscarriage in 2009. Though Anthony’s condition was getting worse, Lembo did not know very much about PTSD and could do nothing but ask her husband to “get help.” Fearing that the military would take away his security clearance, Anthony refused to see a doctor or psychologist. By the time Lembo learned more about PTSD and its warning signs, it was too late.

Now a military widow at 28, Lembo is raising awareness for veteran suicide and PTSD. She hopes that her video will convince hurting veterans to seek help before their families experience a similar tragedy.

“[Veterans are] scared to get the help,” Lembo revealed in an interview after the video went viral. “They’re scared to lose their job because they work so hard to get there. They don’t want to feel weak. If you are working in a special forces job, you cannot be weak.”