Marine Opens Up About Cancer Diagnosis in Youtube Series

Marine Staff Sgt. Mark Fayloga doesn’t believe he is good at connecting with people. In his very first installment of his bluntly titled Youtube series ‘F**k Cancer,’ however, Fayloga has already successfully connected with a new community of veterans, cancer survivors and supporters.

The first episode of ‘F**k Cancer’ begins in a doctor’s office. We see Fayloga sitting patiently has his doctor explains his diagnosis. The 30 year-old Marine has Hodgkin’s disease, a form of cancer that affects the lymphatic system. Images of his MRI and biopsy results flash across the screen as the Fayloga digests the news.

The Marine then addresses the camera directly to discuss his diagnosis in the only way he knows how–with jokes and off-color humor.

“I tried a riddle at work. I was like, ‘Hey, what do Walter White, Lance Armstrong and Mark Fayloga have in common?'” Fayloga said. “It didn’t get a lot of laughs. No one even guessed it, actually.”

He enlisted in the Marine Corps in 2010 as a combat correspondent. Fayloga was deployed alongside an infantry battalion in Afghanistan, where he took photographs that won him an award from the Marine Corps Heritage Foundation. Having left active duty in August, Fayloga now works in a civilian job at the Pentagon.

Fayloga explains that he first realized something was wrong with him at the end of November after he felt extremely fatigued at the gym. A month later, the hard truth was right in front of him.

His sudden diagnosis was a shock, but it inspired Fayloga to start a video series to document his journey. After running through several names, such as ‘Finding Chemo’ and ‘Hold Me Closer Tiny Cancer,’ he finally decided to be genuine to himself and take the vulgar route. And so ‘F**k Cancer’ was born.

“I know it’s pretty vulgar, but so am I,” Fayloga said in the video. “And fair warning, early on I found that dark humor is really helping me through this, and it’s only going to get darker from here.”

He has already undergone one surgery and had three entire liters of fluid extracted from around his lungs. Fayloga revealed he was scheduled to find out more about his condition.

“Who knows, maybe next episode will be the last one,” he said hopefully. “Not because I’m dead. Maybe next week I’ll get really good news…Until then, f**k cancer.”

Vulgarity aside, the reception of his video has been very positive. Other veterans who have been through the same thing are sharing their own stories and commiserating with Fayloga’s new challenge. 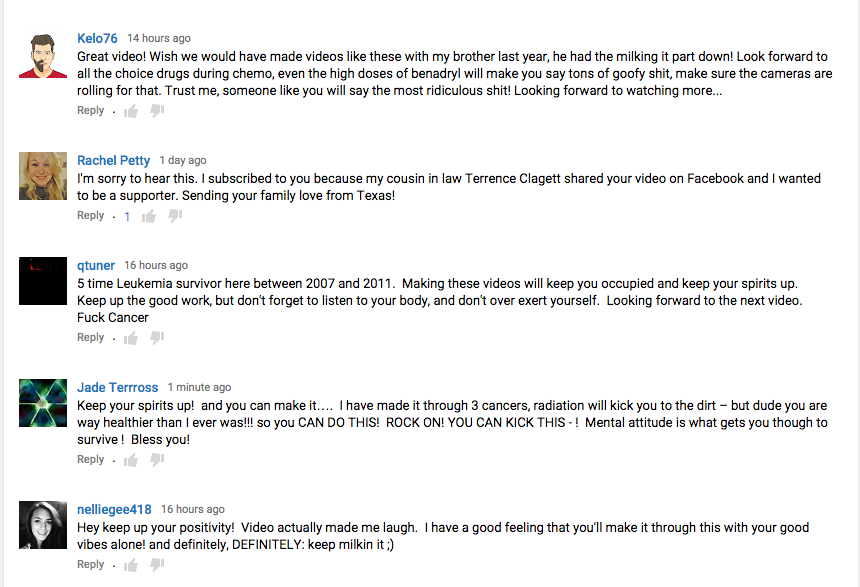