A salute is a gesture of respect made between military personnel. Throughout American history, military salutes have allowed soldiers to convey deep admiration and respect for their superiors and comrades through action rather than words.

SALUTE, a Las Vegas veterans program spearheaded by Caesars Entertainment, does the same thing through community advocacy and veteran hiring.

The veterans program started as a small group of five veterans who wanted to give back to their community. Since it was formed in 2014, SALUTE has ballooned to 50 members dedicated to organizing veteran events and fundraisers. In tandem with Caesar Entertainment’s Enlisting Heroes program, SALUTE helped host 157 events and raise $58,365 in 2015.

One of SALUTE’s largest sponsored projects, the Las Vegas Veterans Memorial, is a salute made manifest. The sprawling monument will feature 18 gilded statues representing every military conflict in American history. Visitors will be able to walk amongst American heroes from every era and branch, ranging from a colonist fighting during the Revolutionary War to a nurse serving during World War II. The centerpiece of the monument is a tribute to military families. 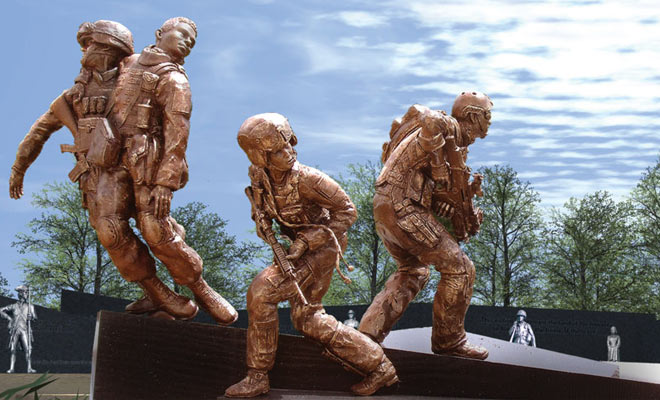 “The vision behind the project is to build a world-class national memorial that provides a powerful and lasting experience for visitors while evoking a deep sense of gratitude and respect for our nation’s veterans and their families,” Caesars Entertainment’s SALUTE webpage says of the memorial.

“The monument will also draw attention to the sacrifices of families of servicemen who are left behind,” the site adds.