A page from a Bible featuring a letter from former President Franklin Delano Roosevelt to American troops in 1941 has been shared more than 14,000 times on Facebook. In the short passage, FDR asks troops to find solace in the Bible during times of war. 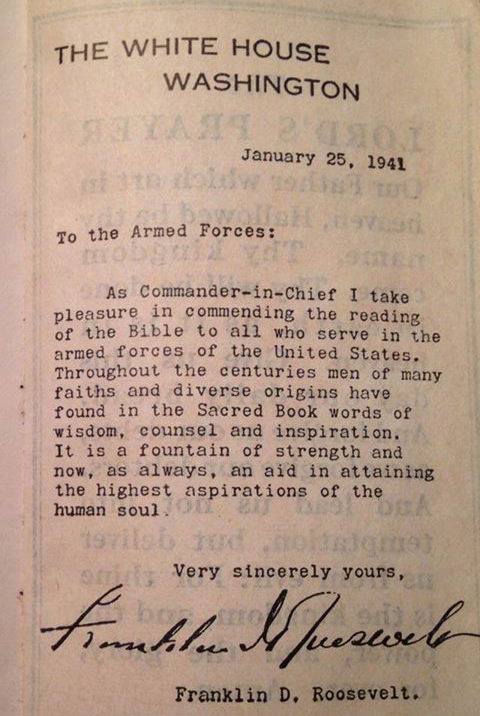 To the Armed Forces:

As Commander-in-Chief I take pleasure in commending the reading of the Bible to all who serve in the armed forces of the United States. Throughout the centuries men of many faiths and diverse origins have found in the Sacred Book words of wisdom, counsel and inspiration. It is a fountain of strength and now, as always, an aid in attaining the highest aspirations of the human soul.

This message resonated in the military community, causing veterans to comment and share the photo across social media.

Most of the comments are positive.

“Now those are words I would love to hear from our current President!” Mary White wrote in the most liked comment on the entire thread.

“That is a true American President ! Wish we could see more appreciation and gratitude for our servicemen and servicewomen !!!” another said.

Other comments were more critical of FDR, President Obama, the Bible, the Constitution and pretty much anything users could think of.

“That letter actually was signed by an American socialist who sold half of Europe to communism under the domination of the USSR for Stalin’s efforts in maintaining a second front against Germany during WWII,” someone else wrote. “FDR was not that great a person. Neither was Lincoln. Look how many people died under their policy of aggression.”

“Now it’s banned in the military. Chaplins are fired for praying in Jesus name. This nation has turned its back on God,” another nay-sayer said.

The subject of religion in the military has been a touchy one, especially considering the recent effort to remove a sign saying ‘God Bless the Military’ from a military base. While it’s unlikely that a Bible like this one will ever again be distributed among the troops, we can still appreciate this relic and the message it carries.