When an American military service member is killed in combat, their loved ones must come face-to-face with the casualty assistance calls officer on the other side of a door.

“We got to the door and he didn’t really realize what was going on. He was more or less happy, like ‘Hi guys, I was a Marine, too’ — and then it sunk in, all of a sudden.”

Giese’s son Ryan was killed in action after stepping on an IED in Afghanistan. He was supposed to return home that February.

Nearly six and a half years after he received the grim news, Giese received a package that contained an important piece of his son’s life.

Inside, sent from a stranger, was Ryan’s dented dog tag, packed nicely in a little box. The tag had passed through many hands since it was first found by a soldier in Afghanistan. From there, it was sent to that soldier’s father, who was able to track down and contact Ryan’s widow.

When she finally received it, however, she passed it along to Giese, stating in a Facebook message that if it’s what she thinks it is, she would like him to handle it.

One of Ryan’s buddies told Giese that the tag was probably a boot tag due to its size.

It might be small, but it meant more to him than anyone could imagine (via Military Times):

“We couldn’t find his left leg and his right arm,” Giese said. “Who knows, after all these years and the desert storms and winds, what took place.”

The tag arrived just in time for Father’s Day.

“I sat down at the kitchen table and opened it up. I didn’t know what it would look like. He had it presented nice in a little box but I had to get it out of there. I had to hold it,” Giese said.

It has been sitting on his desk for a week now. Such a tiny thing, it is able to fit easily into the palm of his hand but big enough to hold so many memories. Giese has an entire room in his house full of signs of Ryan — photographs, his basic uniform shirt, his dress blue hat.

“I never got to see him in his dress blues. Always wanted to, I just never got the chance,” he said. “Well, except in his coffin.”

A worn bible, with Ryan’s name scrawled on the inside and pages that had creased corners, was sent from a fellow Marine who brought it back from Afghanistan. 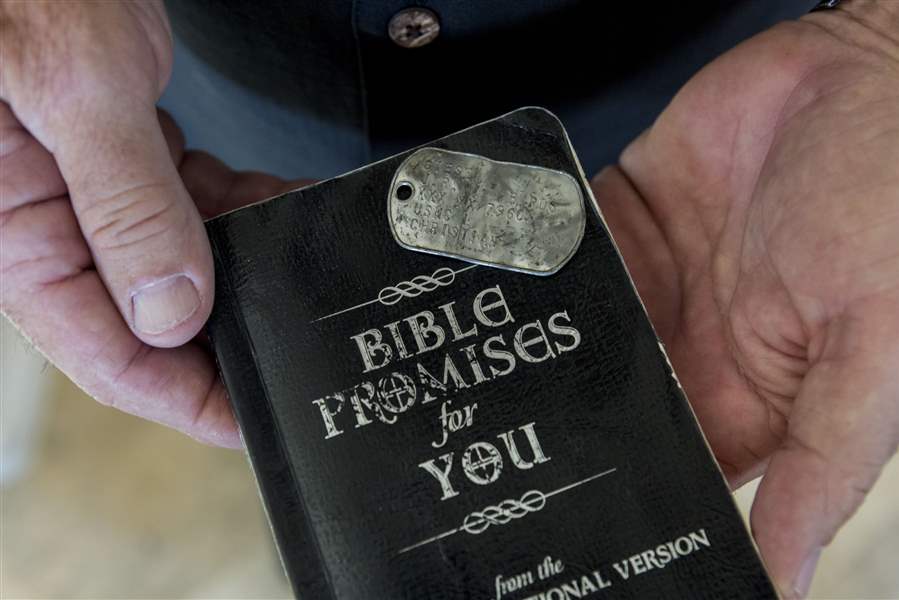 To Giese, these little reminders act as little messages from his son, showing him that Ryan is never too far away.