Navy vet Loren Marino has no time to lose.

After refusing to undergo surgery to delay the development of her terminal ovarian cancer, Marino and her Cesky Terrier Hector are attending the Westminster Kennel Club Dog Show for the final time. Though Marino takes 48-52 medications a day to manage her various health conditions, she showed no sign of slowing down before the prestigious event.

The Westminster Dog Show is taking place over the course of two days, and it will air its conclusion on Feb. 16. Marino and Hector have competed in the worldwide dog breeding circuit for ten years, and even brought home Westminster’s Best of Breed Award in 2015 and the Award of Merit in 2014.

“It would sure be nice to bow out with another breed win,” Marino told the American Kennel Club. 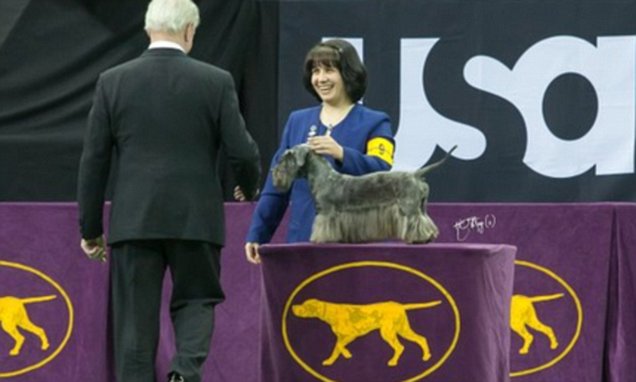 Marino enlisted in the U.S. Navy at the age of 19 and trained as a canine handler. It was during her military service that Marino developed her love of dogs and unyielding grit. After retiring from the military, Marino bred the first Cesky Terriers and was instrumental in bringing the breed to the United States. With Hector by her side, Marino has traveled the world pursuing her passion.

“My time with Hector has been beneficial physically and psychologically,” Marino said. “Keeping him in condition requires me to get up, get out, play ball, take walks, and make periodic trips in the car for his special burger treats.”

Though she takes at least 48 pills a day, Marino does not take any pain medication.

“My tolerance for pain is high,” Marino said. “I am a fighter and at the same time I want what’s best for my dogs every day. I refuse to just lie down and wait.”

Regardless of how the Westminster dog show turns out, the Navy vet and her dog will do their best to accomplish as much as possible.

“The two of us have checked off a lot of my bucket list. When I do feel ill, he is the first to make me smile. He knows when to stay by my side and just be there. And when to push me or make me laugh,” Marino said.

You can donate to Marino’s bucket list fund here through GoFundMe.