Whether you mean it sincerely or not, “Thank you for your service” isn’t helping anyone. Sadly, it actually does more harm than good.

After 14 years of wars fought by an increasingly small percentage of Americans, the distance between our military and civilian communities is larger than ever. Meanwhile, when the two cross paths today, our best chance of repairing that relationship is all but lost because of that now-meaningless expression you all know: Thank you for your service.

For a lot of people it’s just a habit at this point, a trained response without any real sentiment. It’s as insignificant as someone saying ‘good morning’ to everyone they see before noon. And even if you really mean it, these five words just aren’t capable of meaning what they should anymore.

As a veteran myself, I have never been very comfortable with the phrase, but I was never sure if that was just me. Talking with a group of post 9/11 veterans from different services, I asked how each of them felt when someone says “thank you for your service”? All of them snickered and said they didn’t feel anything. And then all of them wanted to tell me what their “canned response” was to that “canned statement.”

One guy always says “thank you for being an American,” while another says “thank you for paying for my eye-surgery.” One makes light of it and says “you’re welcome, democracy’s on me today.” Another guy usually waits for the person to move along and mumbles to his friends: “f*** you too.”

Where is the disconnect?

Thank you for your service has become a catch phrase and (here’s the rub) the only connection many Americans ever have to the armed forces. Sadly, it is now the best representation of the growing gap between American civilians and the men and women who volunteer to serve in their defense.

In her book Afterwar: Healing the Moral Wounds of Our Soldiers (2015), Dr. Nancy Sherman discusses this conflicted relationship veterans have with the phrase and the people who casually offer it. As University Professor of Philosophy at Georgetown University and the Inaugural Distinguished Chair of Ethics at the United States Naval Academy, she is a philosopher who lectures worldwide on moral injury and military ethics.

Dr. Sherman relates this to a greater problem that she describes as the “gaping disconnect between those who wear the uniform and those who don’t.” She describes thank you for your service as a “token of gratitude or something that is meant to break the ice, although it often doesn’t accomplish that goal.” Instead, it can at times come across as “glib,” or just a “one-stop remark [a person] can dispense with” to avoid any meaningful communication.

We all know (and surveys show) that most Americans are sincerely grateful and supportive of our troops. But popular support for the wars themselves and everything that happens in the wars does not match the vocal support for the troops fighting those wars. This subconsciously affects how the public relates to its soldiers. 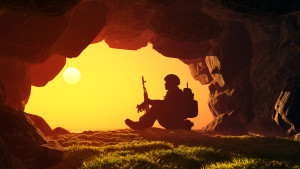 Military members volunteer to serve on behalf of the other 99% of the population, and the danger of an over-reliance on a token of appreciation is that, taken by itself, it can come off like: ‘thank you for taking the hit for me, but I don’t really want to know about, care about or approve of what you did while you were there.’

Dr. Sherman argues that this reflects the efforts of many people to “separate the warrior from the war.” The urge to do this seems to be at the heart of the relationship and communication gap that exists today.

Yes, many people are very proud and respectful of military members even if they don’t personally believe we should have been at war in Iraq or Afghanistan. 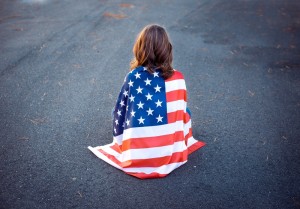 A significant number of veterans are personally dealing with the moral or ethical implications of things they witnessed or experienced, what Dr. Sherman calls the “moral wounds” that result from experiencing war. We won’t know the full tally of veterans affected in this way for decades, but it is safe to say the number is significant after so many years of war and repeat deployments for so many.

The things that a civilian doesn’t like about war or want to hear about from a soldier’s experience are the very same things that soldiers may be trying to heal from when they come home. By shutting down any chance of communication, we are then asking veterans to deal with these issues on their own after shouldering them with the burden in the first place. Not every veteran is ready or willing to talk about their experience, but all of us owe them the chance to do so if and when they are.

It’s no surprise that most people don’t think about terrorism, war or our military in their daily lives. The September 11th attacks were a long time ago. At the time, major news organizations bombarded us with updates of all the casualties our military suffered, honoring the lives and sacrifices of individual service members.

What coverage do you see today? How closely are news organizations reporting on events and our military interests in Syria, Yemen, or even Afghanistan and Iraq? Do they ever talk about the American service members involved in or affected by these conflicts? What stories do you see about the service members who are killed or wounded today? 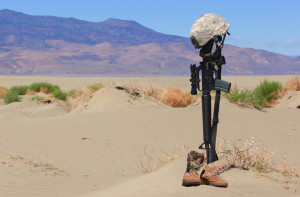 These stories may pop up here and there or they’re buried at the back of the segment or paper as a sort of editorial throwaway just like thank you for your service. But news organizations cover events and stories that people want to watch and read. Any lack of coverage is only a reflection of our collective lack of interest.

Many rightly boast that America currently has the greatest fighting force in the history of the world, yet individuals across America are less personally invested in the military than ever before. Advancements in technology and knowledge make the U.S. military so efficient that just a fraction of the total population can defend the greatest nation in the world. Fewer people serving also means that fewer people know somebody who has served in the post-9/11 military than during any other major conflict in our nation’s history.

This isn’t a condemnation of anyone. Maybe paying taxes is all the connection someone wants with the military. Or maybe some have bigger problems in their lives than worrying about military veterans. Every American has the right to choose his or her values and priorities, and there are a lot of people who need help and attention in our society today more than veterans. However, if gratitude toward military members is one of your priorities, thank you for your service isn’t the way to do it.

What should we do instead?

If you want to thank a veteran, be considerate, be genuine, and be willing to listen or have a conversation. Dr. Sherman suggests simple alternatives that may actually contribute to repairing the military-civilian gap. If the service member appears to be willing and able to talk with you, you should invite a respectful conversation.

“I am grateful for your service. Where were you deployed? What was it like?”

You might also ask: How is your transition back home so far? What is/was your job in the military? How is your family doing with your service? What do you want to do now that you’re back?

Those who did not serve in the military often say that it’s difficult to understand what military members have been through, so they are uncomfortable asking questions and afraid that they will offend the service member by asking.

Many veterans have no qualms talking about their service and the things they’ve done, and some seem to be able to move on relatively easily after war. But it’s also true that many do have physical and emotional scars or moral wounds as a result of their service and are dealing (or not) with lingering feelings of guilt, shame, or helplessness, among others.

Dr. Sherman also points out that in life, some number of people will randomly witness a horrific car crash or know someone who has been killed, injured or has hurt themselves, and they may wonder what they could have done differently to help or prevent the trauma. Some people are the victims of random violence or grow up in unhealthy environments. Some may hurt another person in a moment or even a series of unhealthy situations and relationships.

All of these people may have moral wounds as a result and need to connect with others in the process of healing. Our military members are just more likely than most to encounter these and other forms of moral trauma as a function of serving in a time of war.

Society and the media chase down the survivors of plane crashes to hear their stories. After someone loses a loved one, some people keep a respectful distance, but nearly everyone has shared that experience and offers support to the bereaved. The veteran returning home is not so unique that the media is rushing to publish their story, nor are they so common that everyone can relate. Instead it seems they are expected to compartmentalize their experiences in a box away from everyone else. 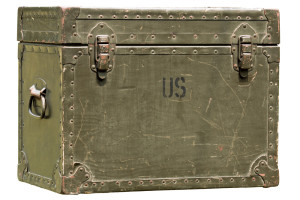 Again, simply saying ‘thank you’ and avoiding potentially uncomfortable conversations contributes to the growing divide between the military and civilian communities; it keeps the lid on that box. That in turn makes more people uncomfortable saying anything more than thanks, and the cycle continues and gets worse.

The examples above for ways to engage with veterans are simple and very different than saying “thank you for your service” because they encourage open and sincere conversation that contributes to understanding, communication, and healing.

Each service member is an individual, and their service and sacrifices are unique to them. Addressing us as individuals is about making an effort not to separate the warrior from the war, while also not ignoring the realities of war and its profound moral and ethical implications.

Our nation is still healing from the 9/11 attacks and the wars that followed. Our service members are still healing from serving in those wars. Fortunately, the healing power of connection, conversation, and community not only helps our veterans, it also helps to repair the relationship between the civilian and military communities that exists today.

Ultimately, older veterans probably provide the best example of how to reach out to service members who are returning home today. Having lived it themselves, they are a bridge between the divided communities. The best thing you can do is to follow their lead. So the next time you meet a veteran, don’t say “thank you for your service”; instead try shaking their hand and saying “welcome home, how was it, and how are you?”