Over the years, the United States Navy has proven to be a dominant force in battling those foreign and domestic enemies attempting to poison and destroy what America “is”: freedom, liberty and the pursuit of happiness.

And, as of this October, it’s taking on something entirely different: a disease. This month is Breast Cancer Awareness Month, and in the spirit of standing firm and defiant against the terrible, evil “c” word — the military branch has “painted” a retired Grumman F9-F Cougar a hue of pink known as “Heliconia.”

The old fighter resides on the USS Lexington, a World War II-era carrier off the coast of Texas (Corpus Christi).

It won’t stay pink forever though. A special procedure — applying liquid dishwashing soap to the latex paint — keeps the pretty paint job from becoming permanent.
The Lexington was decommissioned in 1991 and converted to a naval aviation museum a year later. Rusty Reustle, director of operations and exhibits at the USS Lexington museum, said he got the idea after seeing filmmakers employ the technique aboard the ship during production of the 2001 Ben Affleck film, “Pearl Harbor,” CNN affiliate KRIS reports.

Once a major player in the Navy’s arsenal, the Cougars saw action in the Vietnam War and were also once the fighter of the choice for the legendary Blue Angels. 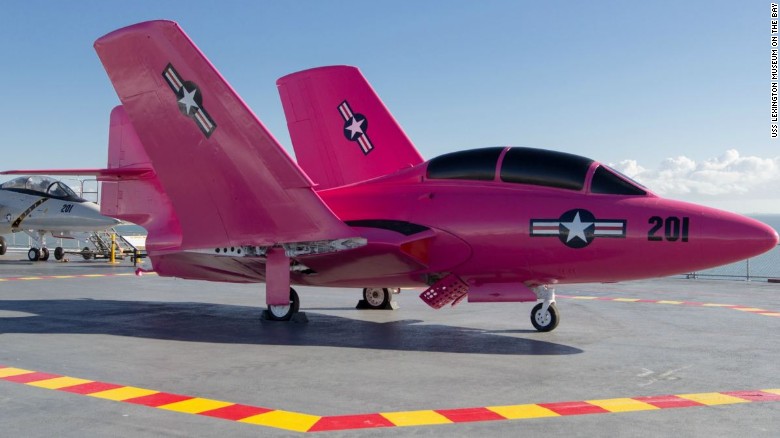